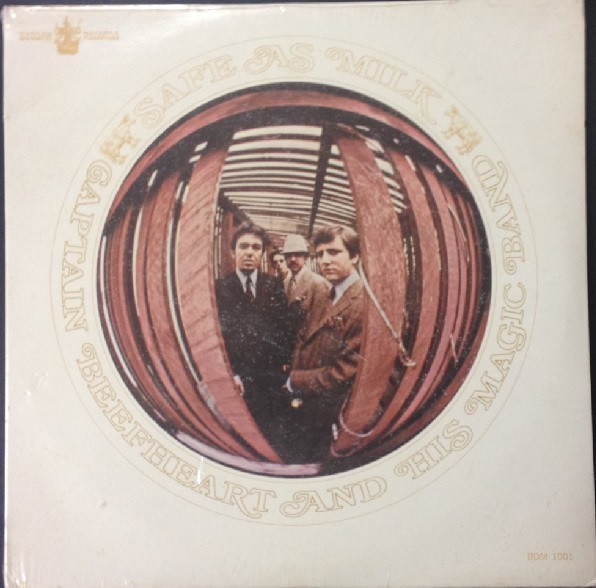 This guest review might feature the oldest record featured on VoS for quite a while because it is none other than Captain Beefheart’s seminal record Safe As Milk! And who else could have a really soft spot for this record in his big, big heart than Kjetil, the man with the tallest hat, from Årabrot!

We often ask musicians to give us a guest review of their favorite records and sometimes it can be a real pain hitting them up again and again, but not so with Kjetil. When he promises to give you something, he always delivers and that is just one of the reasons why Veil of Sound loves the guy so much. The most prominent reason is of course his music and thus we are so happy to have a guest review from him, because maybe we can discover some of the roots for his band! And now here are his words on Safe As Milk:

I was born in the desert!

It must be the ultimate rock’n’roll-album intro. It instantaneously brings the listener not only a specific fraction of the American popular cultural heritage, but also brings him or her directly back to the psychedelic times of the sixties and -may I propose- even forward in time towards new territories of inspiration and creativity.

For me, growing up on the Norwegian west coast, not much seems farther away than the desert. But the desert can be so much more than sun and sand. There are the physical deserts such as the sea and outer space and then there are also the deserts of the mind: the world of inner peace, mystery and existentialism. Man Alone With Himself in the the most literal meaning of that phrase. And that desert is easily recognisable in the darkness and rain and northern winds of the Haugesund I grew up in in the late nineties. I remember dark wet streets slouching home in beat-up Converse shoes through the fog and sleet and listening to Safe As Milk on a Discman and connecting with Beefheart in some metaphysical landscape. A barren landscape born out of the cultures of thousands of generations, something derived from a deeper and more sacred place.

By the late sixties Beefheart and his Magic Band had become the amalgam of free jazz, blues and rock’n’roll that the band is so well known for. But a little earlier -back in 1967 - the band was obviously younger, more raw and pure. Basically a little closer to the source. You know, the blues of yore and fifties rock’n’roll, but also the modern R&B and even their own take on soul music - just check out the wonderful “I’m Glad”. Beefheart’s voice is in top form delivering supreme baritone blues, the guitars jangling and dissonant and ripping propelled forward by a master rhythm guitar courtesy of Alex St. Clair. But above all Safe As Milk is nothing short of a Total Groove Machine. The start-stop drum tattoos of Drumbo is everything Bo Diddley could have dreamed of when he created his famous beat and then there’s Jerry Handley’s tight, thunderous and just perfectly groovy bass. Not forgetting the presence of a teenage Ry Cooder arranging and playing additional guitars and bass.

Safe As Milk is one of my favourite albums of all time. No album has been with me since I -as a naive, lanky, long-haired teenager- got obsessed with music back in the nineties. Still today when we at a musical junction face the devils of stagnation and wonder what the hell we are doing we always ask ourselves: What would Beefheart do?

You can listen to Beefheart’s record by using the player at the top of this page. To find out, if there are any similarities between Safe As Milk and Kjetil’s band, you can listen to their latest opus below.

You can also check out what we had to say about Norwegian Gothic in his review here.