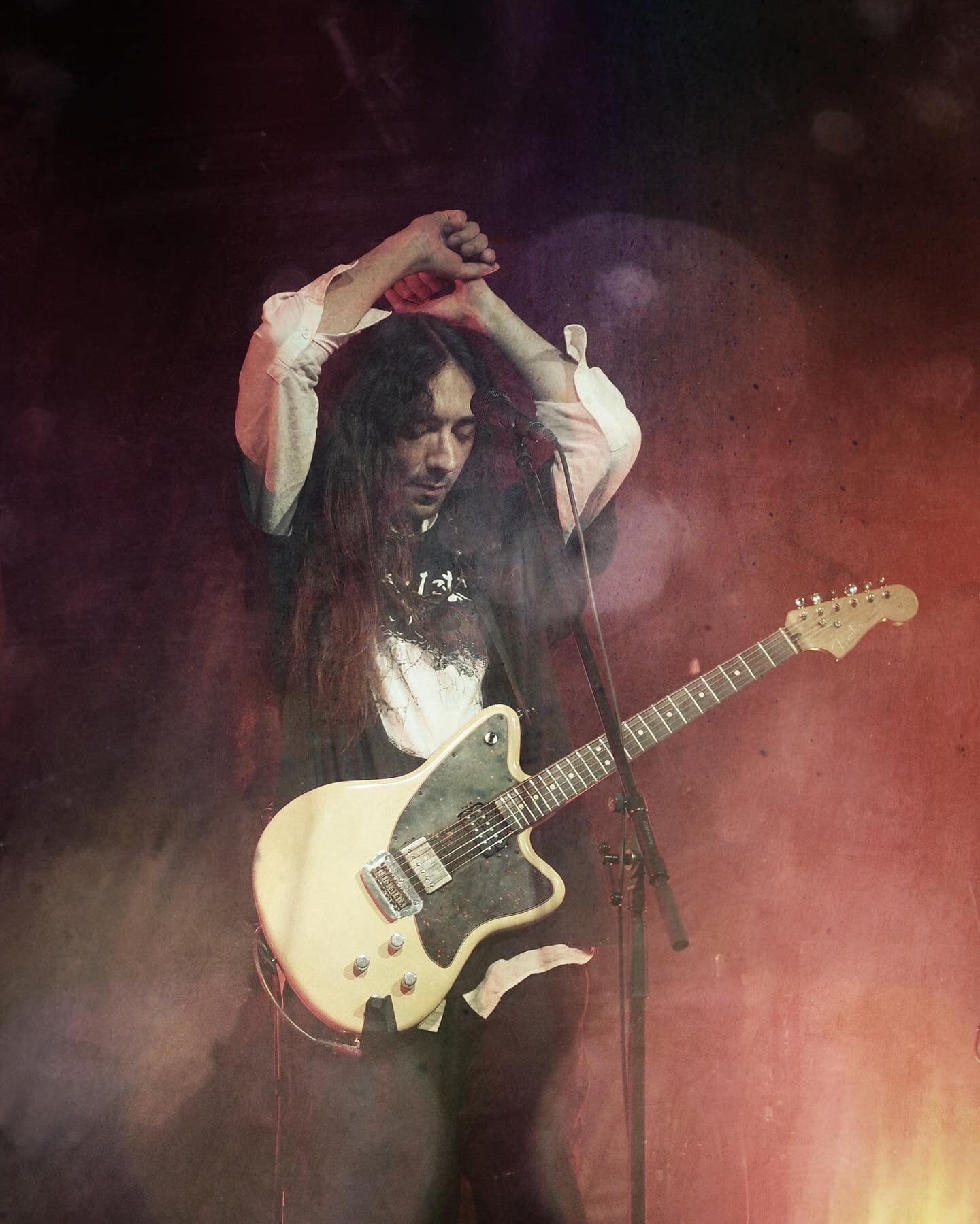 Day 2 of 9 – we hope you enjoyed yesterday‘s interview with Jarboe. Haven‘t listened to it yet? Well, don‘t worry, it‘s not gonna be taken down any time! Today we have a classic written interview with you and as you have already seen by the title of this page, it‘s with none other than Neige from Alcest! At first glance this might seem like a short interview but read carefully, there is a lot in it that might make you think or that you might not have known!

When people talk about Alcest, they often talk with admiring glances and with a lot of respect for the French band is regarded to be one of the pioneers for a sound that bands like Deafheaven or Heretoir took up. The band has been writing new material and we are happy to hear something about it and also about Neige’s approach to his music and life in general. Enjoy!

How do you cope with the dichotomy of being a completely normal person and at the same time being the face of a global phenomenon (at least in the metal world)?

It’s a difficult question. Well, I think speaking about the influence of Alcest as a phenomenon is probably a bit of an overstatement. This style of music is pretty underground and even if I am aware that a lot of bands were inspired by my work, which I am really grateful for, I never perceived it as something overwhelming or difficult to handle. Maybe I am a little bit naive / not aware of this influence but yeah I don’t think about it too much and rather focus on making the best possible music with my own project. I am extremely self-critical, and never really happy with what I create, so my musician life is like a never-ending quest for satisfaction. On the other hand, when someone comes to me saying that he/she formed a band after having heard Alcest, I take it as the biggest compliment possible, and as I said above, I feel extremely humbled and grateful every single time I hear something like this. What our fans tell us is always so beautiful, touching and heartwarming every time.

You are from the South of France where the “light” has a certain quality and where legends are as plentiful as in other parts of the country – how much have both influenced the music of Alcest? For example the cover of Shelter?

Light is everything for Alcest, and also for me as a person. I grew up with it in the South of France, as you said, and it’s a part of my identity. I need it on a daily basis to feel at peace. That’s also surely why my two favorite seasons are Spring and Summer, which I pay tribute to in many of my songs’ lyrics. I also remember that originally it was one of the reasons why I wanted to make this project, thinking «So many bands in the Black Metal scene talk about hate and darkness. Why hasn’t there been any (project) with more luminous, ethereal and positive aesthetics? ». Parallel to that, Alcest deals with a lot of different ideas, like spirituality or the feeling of not belonging down here, nostalgia, etc. But yeah, the «light» component has always been really important in this project.

Many people do not accept or see the (super)natural world as a world parallel to what they perceive – how deep is your belief in such things?

Well, I can understand these people, totally. If I hadn’t had a spiritual experience myself when I was younger, I would surely believe in nothing and just consider the reality we see as the one and only. I believe we only can grasp very little of this reality, because of the limit of our human senses, but reality is probably much vaster than what most people think. I always have felt trapped in my own body, within my earthly senses, and therefore felt a lot of frustration because of this. Music, because of its universal and transcendental aspects, helps me cope with it and I speak about all this constantly in the lyrics of the band. I consider our life on Earth to be like an experience, a journey limited in time, an opportunity for us to grow, learn, deal with various feelings linked to this world of matter. Feelings such as pain, joy and everything in between. Nobody is perfect and we are all going to make mistakes during our experience down here, but I believe that the ultimate goal is to spread as much love as we can. Then, when we die, we go back to where we came from, have a look at our own actions, and do it all over again. These are things that I strangely have felt within me since a really young age, almost in an instinctive way, but I am never going to try to convince anyone of it. That’s why I consider myself a spiritual person but I really dislike religion in general for its arrogance and its will to control people’s believes and actions, but this is another subject obviously.

Did bands like Mogwai or Godspeed You! Black Emperor or Codeine or My Bloody Valentine really influence the change in your sound back in the day, like many people try to explain the shift in your music after a few years of Alcest’s existence?

It depends on the bands. At the time I was recording my first album Souvenirs… I just started to discover Shoegaze and Post-Rock. My inspirations were actually more spiritual and nature-oriented than musical. The songs for my album were already written at this moment, and I guess these styles of music had an influence on my sound only during the last steps of the recording. There were some bands I already was familiar with though, and who certainly influenced me. Explosions In The Sky, The Smashing Pumpkins or New Order for their melodic bass lines. Dead Can Dance also had a big influence on me for the atmospheric/tribal quality of their music. I also was listening to a lot of Yann Tiersen at this time and loved how nostalgic and delicate his songs could be.

You became a member of the French metal scene early on, how was growing up in it? Have you ever felt unaccepted in any way?

I guess because of my specific perception of things I was not at all the typical Black Metal dude. Also back in the day most of the Black Metallers were listening to metal only (Thrash, Black, Death, Heavy) whereas I early on got into totally different styles of music like Indie Rock, Dream Pop, New Wave, which I remember some of the purists were not approving of at all. It’s funny to think about it now considering how open-minded the metal community became in recent years. When I started the band, because of its uplifting vibes, Alcest was for sure really unconventional, and a lot of closed minded metal heads didn’t know what to make out of it. I didn’t care about it and just kept on doing my own thing.

If you had to explain your music to a film nerd who has no real idea of metal music – how would you describe the music of Alcest?

Once I said to someone as a halfway joke ”I guess it sounds a bit as if the Elves in the ‘Lord of the Rings’ were having a rock band”. I think it’s a pretty accurate description (laughs). I am not very comfortable with labels when it comes to Alcest’s music.

Listening to Alcest often has a very soothing effect on people even though the music has that black metal foundation – is that just my emotion or is that something that is important to you – to affect people in a positive way? And if so, how do you know that this song or this part can have that effect?

Yeah, even if Alcest’s music can be melancholic, or even angry at times, I always wish for people to get a positive effect from it. A lot of our fans tell us that our songs truly help them. It’s one of the best things someone can tell an artist I suppose. As for my way to put such feelings into the music, I tend to think that the emotions I get while writing an Alcest-song are the ones that people will also get while they listen to it, so I take it as a good reference point. Most of my work is very visceral and connected to my intuition. And it’s this same intuition that tells me when a song is finished or needs some more work, or when it is just not good enough to be on an album. I have a very instinctive way to write music, all emotion based.

Coming to the new record that you are working on – can you give us any hint at what it will sound like? What it will be about?

Our last two records were darker than our first ones, especially Spiritual Instinct, which is probably the heaviest/darkest Alcest record so far. The new record we are working on is coming back to a more «fragile», otherworldly and melancholic side of Alcest, a bit like we had it on the two first albums, but with a more modern and elaborate approach. We are taking our time making this album because we feel that it has a lot of potential and we want to make something ambitious, artistically speaking. There will almost be a «soundtrack»-approach to it, as it will probably feature other instruments/arrangements than just the usual guitars/bass/drums/vocals. I can’t tell much more about it but we are really excited about how it will progress.