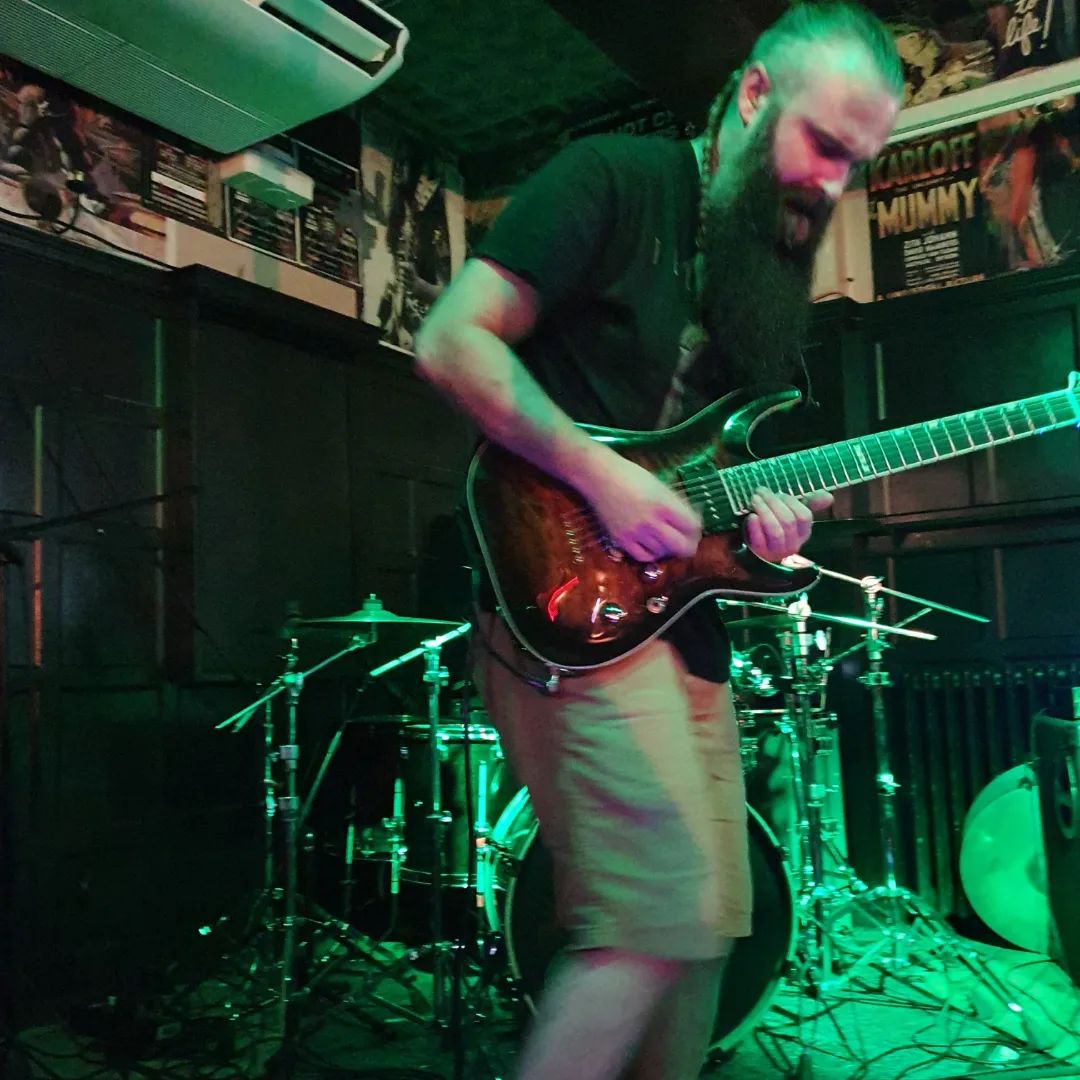 Following on from the premiere of their latest song, we also had the priviledge to sit down with Mountainscape songwriter Dan Scrivener to talk about their new album and much more besides.

Aaaaahhhhh, Post-Metal, you wonderful monolith of the known and the unknown. Known because your shape is recognizable from afar and your peak makes it clear that the only way over is up. Unknown, because each mountain is different, some easier accessible, some less. Mountainscape’s version of Post-Metal is not an unknown one, for sure, but it’s at the same title also different from others as it tends to have a certain loftiness about it that needs some further information by tourguide, songwriter and guitarero Dan Scrivener. Our man Simon got the opportunity to talk with Dan about the band, their new record and what to expect from the Reading-based trio.

First off, could you tell us about how Mountainscape got started?

James and I are brothers and have played in bands together since we were teenagers. Mostly in the realm of Black Metal, the latest of which being Aklash. James left that band in 2018 as he’d lost interest in playing drums in a purely Black Metal project, I left in 2021 for much the same reason. We had played with Ethan in Third Horizon (which is a Post-Rock project of mine) and heard him play with Asira. He’d also mixed and mastered music I’ve created prior to Mountainscape and we’d shared many a beer! So in 2019 James and I began to discuss starting a band where there wasn’t any set musical direction other than just writing what we wanted to listen to, in the ‘post’ music scene where essentially anything goes. Ethan was an obvious choice to join us as we’d also discovered a shared love of Russian Circles. In fact the three of us attended a Russian Circles show together in London together before agreeing we’d make the band a three-piece utilising live looping.

Is there a main creative force, or is it a joint band effort?

I’m the songwriter in Mountainscape. Our process is that I’ll demo full songs and send them over to the boys, then we’ll discuss if they want to change anything. James is very good at trimming the fat! Some songs will stay in the same form as my initial demo but others will have sections chopped or rearranged by James and myself. I will include any bass parts that I want in the track, where the bass has the melody for example and then lay out skeleton ideas for Ethan to flesh out in other places. All the initial music comes from my brain but without Ethan and James adding their own personality to the tracks it wouldn’t be the band you hear. Some of the drum patterns in particular on the new album I would never have thought of! I’d also like to take this opportunity to express how grateful I am for working with two shithot musicians who’re happy to help me turn the music that loops inside my head into reality.

Tell us about the new album, is there an over-riding theme for it?

Musically it follows on from the journey we started with our debut Acceptance; creating music for the love of music rather than to fit any set theme. For me the title Atoms Unfurling is a description of how it feels when writing and listening to music, it takes me out of this world, all other thoughts drift away. It’s also a title that lends itself to inspiring some very cool artwork, I’m very happy with the album cover from Mark Erskine. I don’t think there will ever be an over-riding theme with the music of Mountainscape. That’s the beauty of writing instrumental music. Each song can take on a different meaning or purpose depending on who’s listening.

Did you limit yourselves with regards to how it should sound stylistically?

The main driving force behind starting the band was to write without having to adhere to a particular style. There’s soft ambient sections and clean guitars lathered in Shoegaze-influenced chorus and reverbs. There’s also chunky riffs, Blackgaze blasts, climactic Post-Rock build ups and lots of big drum grooves. With Mountainscape it’s all about writing the music that I want to hear. A lot of the music is driven by simple melodies and the contrast between light and heavy. I love it when songs surprise me so I try and incorporate this into the songwriting.

With regards to the new album, are you happy with how it came out?

At this moment in time I couldn’t be happier with it. Hats off to Ethan who’s handled the mixing and mastering at his new studio, ‘Elm Studios’. This was the first time recording drums there which I think came out really well! I love the fact that it sounds like you’re in the room with us. I often find that modern production detracts more than it adds, the clinical over-editing of everything just doesn’t do anything for me. I’m sure we’ll end up picking out things to do differently next time round as time passes…

Are you excited about getting everyone else to hear it, or a bit nervous?

Excited!! Maybe a tad nervous under the surface as well.

As a native of Reading, how are you finding the local music scene? Is there anyone else you think we should be made aware of?

We very rarely play in our hometown to be honest, there’s no scene for Post-Metal here. It’s so close to London which has a huge music scene. In terms of bands that I’m really into there’s Asira (progressive Post-Black Metal) and Cairiss (atmospheric Post-Black Metal), I definitely don’t just enjoy these bands because Ethan’s in them, check them out if you’ve not heard of them! There’s Morass of Molasses who play stonery bluesey Doom. Nyogtha, reverb drenched Doom from another dimension. There are also quite a few good Metalcore bands from round here. Sylosis, Arcaeon, Transients and Terakai. Although it’s not my jam they are all very good at what they do.

Do you go to see live music much? And if so, what is the next show you are looking forward to going to see?

I thoroughly enjoy watching live music. The closest place that most bands play is London so I don’t go as much as I’d like as I don’t have an endless supply of money. Public transport from Reading to London is too expensive and driving in London is less than desirable. I’ve recently seen Deafheaven and been to watch Return of the Jedi with live orchestra at the Royal Albert Hall which was just so good. Got Holy Fawn and Tycho coming up which is gonna make me a happy man.

If you could curate your own one-day festival, who would we see on the lineup

I know a couple of these don’t play live so parts of this festival would take place in an alternative universe, maybe the whole thing. I’m also not sure I’d fit all these into one day, it would be perfect though:

Last regular question, what can we expect next from Mountainscape?

We’ll be gigging the new album as much as we can. I’d love to sort out getting it released on vinyl. We’re currently sorting out filming a set for a live-stream event. I’ve also begun writing the next record. You can definitely expect us to keep thoroughly enjoying making music together.

Now onto our quickfire round:
Wine or Beer? Beer

Football or Rugby? Neither

Board game or Console game? Console

You can now listen to the first two singles, one of which we premiered last week, at the band’s Bandcamp site where you can also order the record directly.