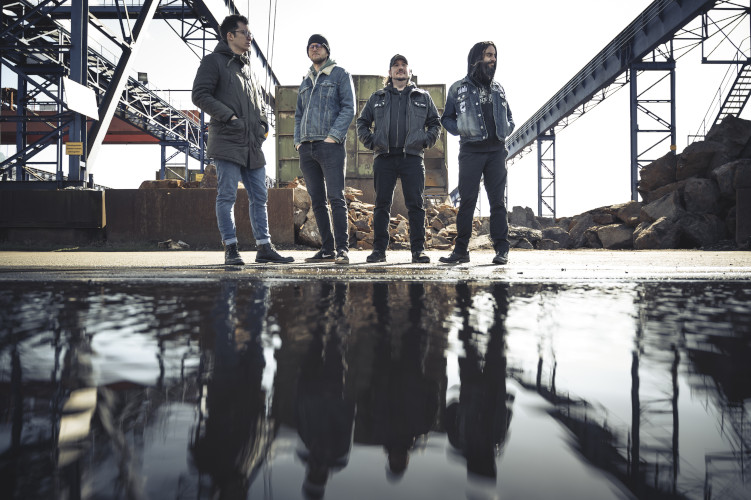 Five months ago, Noorvik released their third record Hamartia via Tonzonen and the record is still spinning lots of heads and has been spun on numerous record players since then. “The Feast” is still a forerunner for Post-Rock-track of the year! The record has so many elements that we thought it necessary to talk with the band about it and about many other things!

Hamartia (here our review) is a term connected to Greek mythology, to an ancient Greek king who not only annoys the gods but who incites their wrath by cruel deeds within his family. The Cologne-based band tells his story and is able to invoke pictures of madness and cruelty, anger and revenge and so much more! So, enjoy what we get to know about the band and the record!

First of all thanks for doing this interview and second of all – congratulations on your latest record Hamartia which was released several months ago. Have the reactions lived up to your expectations?

Yes, absolutely. The reviews were very positive and the feedback we got was overwhelmingly nice in general. We already had several opportunities to present the new album live and the songs were well received. So all in all, we are satisfied, yes!

Could you maybe, for those unacquainted, explain the meaning of your bandname?

Noorvik is a small town in Alaska. That’s all. If you want to know a little bit more, just listen to our song “Chugach” ;-)

Whenever I listen to the record I love its production more and more – how difficult was it to get that special sound right? Or is this the mystery of Dominik and David who recorded and mixed it? How did you describe the sound you wanted to have for Hamartia?

Haha thank you, it’s no mystery at all. Dominik, our bass player, recorded most of the album. So we were able to spend a lot of time in the studio, much more than we did before. We made sure we had the right sounds from the start, e.g. spending a great amount of time to set up guitar amps, trying out different pedals, guitars, etc. There wasn’t really an overarching trajectory or sonic goal, beforehand. We just made sure we had the perfect sound for each part, riff, layer and all combined worked pretty well, in the end.

Your first two albums were released in 2018 and 2019 and now this third full-length was three years in the making – let me guess: a lot of that time was due to Covid?

Actually COVID didn’t affect us that much. Sure, there still are huge delays in vinyl production and shortages of resources of all kinds. But the bigger challenge for us was the change in our line up. We replaced both guitar players by the end of 2019. And of course it always takes some time to get accustomed to each other. We were then able to use the lack of concerts and events to lock us in and write an album that even turned out to become a double LP.

Did the pandemic change your approach to songwriting in any way?

No, we were always writing together in our rehearsal space. We even agreed on reducing our other social contacts and get tested on a regular basis in order to be able to keep meeting in person (no one got sick, btw ;-) )

Now let’s get to the nitty gritty – the story behind Hamartia. Who came up with the idea of talking about King Tantalos?

It was – as it is usually – a collective effort and the result of a brainstorming session in the van on our way to the studio. It all started with the word “HAMARTIA”, as far as I remember.

The mythological story itself is pretty cruel but straightforward: King is mad, wants to provoke the gods, feeds them his own son and is then punished for is immoral and tedious act. But how difficult was it to convert the story into an instrumental album?

Well, actually it was the other way around. We wrote the whole record without a concrete conceptual idea, just trying to write songs that tell a story themselves. Then we started thinking about the bigger picture and how to illustrate the music with an interesting and meaningful story.

Why is “The Feast“ the only song on the album that does not have a Greek name?

”The Feast” is a song that just sticks out from the rest of the record, not only because of its length. It also represents a crucial part of the story (where the final betrayal happens and Tantalos even kills his son). We wanted to highlight that with a special title, too.

Am I right when I guess that that jump and rising tension in “The Feast” shall display the moment when the gods discover what Tantalos has done?

Sure, you can see it that way.

A little pun on the side – did you all suffer “Tantalosqualen” while writing this record?

Not really, we had a pretty smooth writing process. We tend not to force things and we rarely argue about ideas ;-)

Tantalos is said to be the ancestor of King Agamemnon – do you see similar flaws between these two?

Since the two are related, they probably share some character traits. Also, without those flaws, mythology wouldn’t be half as interesting.

Would you agree that hubris is their strongest weakness? Hubris seems to be the biggest weakness in most humans.

Do you, in some way or other, see parallels between King Tantalos and some of the popular figures of our time? Is there some kind of “contemporality“ to the record as a reflection of our times?

Sure, you can find many parallels between Tantalos and current “leaders” and other powerful figures. But actually, we always looked at Tantalos as a representation of today’s humankind in general. If you exchange “Tantalos” with “humans” and “the gods” with “mother nature”, the story gets a really contemporary and urgent twist. … Between you and me, that’s actually how we approached the whole story from the beginning.

You are a guitar-based band – why did you not fall for the trap of using some oriental or Southeastern sounding instruments or synth-passages on the record? I mean, it would have been easier to establish mood and atmosphere that way, wouldn’t it?

First of all, we always try to avoid clichés. Secondly, we think it’s not always necessary to further underline a conceptual theme with obvious musical elements. Especially if it doesn’t come naturally; and we’re not a greek folk band.

Something your band must be credited a lot for are the special limited editions of your records, especially Hamartia – for which you came up with an incredible bunch of goodies to accompany the mesmerizing record itself. Each of the items, no matter if we talk about the t-shirt or the patch or the poster – all are of the highest quality. Do you even make a buck out of these insane editions? Or is that the reason why you only packed 30 of these?

The limited box sets are indeed not very profitable. But we always wanted to put together a special package for a few people. Furthermore, quality and sustainability are very important to us and profit is not our main goal. Sadly, it’s still not common in the music industry to use high quality materials or organic fair trade shirts, for instance.

For the record you once again worked with Tonzonen, the label, which already had released your previous full-length. Was that a natural fit?

It was kind of natural, yes. We share a similar vision regarding the quality of products. You don’t find many labels that only produce highest quality 180g vinyls, coloured, with very nice packaging, etc. It’s also nice that the label is small but continually growing and we accompany each other along that way.

The German scene is pretty active and actually not small at all. We shared the stage with many cool post-rock bands from Germany. But it’s hard to compare different national or regional scenes with each other. Especially in this globalised world.

I guess you are too humble to accept the following compliment, but I think you are at the moment maybe the most exciting German post-rock band, so I must ask this: What will come next for Noorvik?

Thank you very much for the compliment! We might be humble, but we also know when it’s not worth arguing. We only just started to write new material so we don’t know exactly what will come next, ourselves. But we have several shows planned for the rest of the year and we enjoy playing Hamartia live, for now.

Which bands or records influenced you in general? For Hamartia especially?

There are only a few bands on which we can mutually agree, like King Crimson or Metallica, for example. However, post-rock as a genre – at least how we interpret it – lives off influences of various directions. We are all very open-minded in our musical taste and preferences. Thus, we can’t really break our influences down to certain bands or records. Let’s say “some doomy stuff” and “some proggy stuff”.

If you could curate a one-day-five-bands-festival with Noorvik playing as well – what would the running order look like?

Noorvik would open the festival so we can have drinks and enjoy the other bands, afterwards. Then Omega Massif, Isis, Opeth. Rush would be the headliner! (We can resurrect people and bands for that effort, can we?)

Correct me if I‘m wrong, but I think I never heard you cover any other band – does that come with your genre or have you simply no interest in doing so?

We’ve been talking about this for years but were never able to find the right song. For now, that’s not highly prioritised.

And now onto our infamous quickfire round – you get two alternatives and must choose one of them. Maybe you can also give a short explanation for your choice.

Ranges or Mogwai? Mogwai. Sorry Ranges, but they’re a classic!

Astodan or Godspeed You! Black Emperor? Godspeed. Same as above.

Kölsch or Alt or Pils? Pils (but Kölsch is great too).

Dunk! Festival or POST.Festival? Dunk! always has a great line-up and is closer to us.

Writing and Recording or Touring? First the one, then the other.

Vortex Surfer or Gebäude 9? Vortex. We played there several times and have friends there and it’s a genuinely awesome place. We haven’t played Gebäude 9 yet, but it’s cool too.

Stones or Beatles? I hope no one answers something else than The Beatles, here.

Thanks for doing this guys, we really hope you had some fun with these questions because we surely have a lot of fun listening to “Hamartia“! Take care VoS
Thank you for having us and for digging deep into our record! It was a pleasure. Peace.