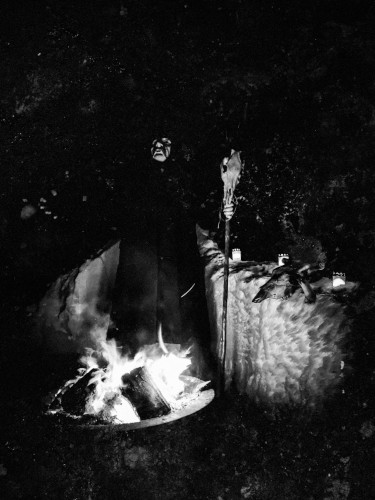 One of my favorite German “black metal” bands will release a new record very soon and when asked if we wanted to do a video premiere along with a short interview there was no way we wouldn’t have done it. We are more than happy to present you this interview with Martin from MOSAIC and his new video premiere for “Wir Sind Geister” from his upcoming album Heimatspuk!

One of the first interviews we published here on Veil of Sound was this interview this interview with Martin van Valkenstijn, the man behind MOSAIC. And we are very proud to present the video for “Wir Sind Geister” (“We are ghosts”) from his upcoming new album Heimatspuk which will be out in April via the highly-productive and ever-interesting Eisenwald label, located close to where Martin lives in Thuringia, Eastern Germany. MOSAIC’s music is more than just folklore and more than just medieval-inspired (or rather inspired by late medieval/early modern times) it is maybe the best amalgam of both worlds this writer here has ever heard. Of course, that could be biased because being able to understand the German lyrics gives so much more to MOSAIC’s work, but nevertheless, the music speaks for itself and it speaks in mighty tongues and variations.

Trying to be not your average webzine we were lucky to be given the chance of a short, five-question interview with Martin to feed your thoughts:

1. What I really like about the new song are the video (we will come to that in a moment) and the music. How come you can sound so black and so medieval at the same time? How did you write the track? Was it difficult to balance out both sides?

Hoi Joi Thorsten! It was actually not that difficult to write the track. It was written quite late in the album process. The first song written for the album was “Unterhulz Zoubar” and it was clear from the beginning that “Unterhulz Zoubar” was going to be the album closer and it directly refers to the previous album Secret Ambrosian Fire within the lyrics. So I wanted to create a kinda frame / mini-concept – that the album opener also has a direct reference to Secret Ambrosian Fire and I came up with the line “Wir sind Geister” - which is part of the interlude for “The Devil’s Place”. And as I prefer to create interactions between my songs & albums – it was the perfect centerpiece for the album opener of HEIMATSPUK.

Lyrically, the whole album is a direct continuation of Secret Ambrosian Fire - it has the same setting and tenor.

Musically, “Wir sind Geister” follows a really straight songwriting structure, just based on verse & chorus. The intention was to create a song without any distorted rhythm guitars, but to keep an overall “Black Metal Atmosphere” and it really turned out really well. So it was quite a natural song development here – the song grew on its own, like all other compositions on the record – driven by heart and soul, blood and darkness.

The original music sample in the beginning is a traditional Polka which was recorded over 100 years ago – here in the center of Germany.

The video is like a collage of found footage and footage shot especially for the video. In that sense it is a “mockumentary”, right, the way it collects both sides, making it a bit harder to separate one from the other. But I take it, you are not mocking anything, so why this kind of video?

The video is based on an old documentary from the 1960s, combined with original footage that’s right. But I think mockumentary is the wrong aspect, I do not mock anything with this video like you already stated. The main idea behind this video is, in a way, a pure contradiction.

Like: People can only be themselves when they wear a mask.

And that’s exactly what you see in this video, people being wild and free and enjoying life. So, it’s really fascinating that you need a mask to be like you want to be.

One recurring element of the video are the masks – are these classical Thuringian masks?

My mask is an old Thuringian mask, which was crafted ages ago in the neighboring city where I live now. Those traditional wooden masks you see in the video are more Franconian/Bavarian-based masks. In Thuringia, there are not many living customs where masks are still essential. Most of those customs are forgotten and dead. There are just a very few in the South Thuringian area – called “Hullefraan” (Huldas Servants) and “Herrschekloese” (Servants of Knecht Ruprecht) which have a few similarities to alpine and south Bavarian Perchten cults. For a few years we have also had a Perchten Group around Gotha now called “Thüringer Bergteufel” (Thuringian Mountain Devils), and also a “witch” group in Mühlhausen, and still some villages doing the “Straw-Bear” rite. And I hope that there will be more and more groups established in due time. We are already preparing something for our village.

Why, in your opinion, do so many Black Metal bands hide behind masks of corpse paint? Because nowadays, nobody is really shocked by it anymore?. Do you think it’s the wish to disappear behind the mask? Is it a wish to hide and not be seen?

That’s a hard and very extensive question, I can just give my point of view here. I guess one center idea is to keep the traditional element of “Black Metal” alive. Even if someone says it’s a bit outdated. But the ancient flame needs to be stoked. This could be one point. But for me, it’s a kinda ritual – to prepare for the stage – to leave the fast moving world behind – and to enter the realm where you can be just yourself and express just that. So it’s really essential to leave your everyday “skin” - and be how you want to be like – as I have already stated in the second question.

A lot of people often come to me after they saw a MOSAIC live performance, and tell me “wow we didn’t really expect this kind of expression, you are a totally different person on stage….” Yes, it’s like having an inner catharsis or reset while performing, to get rid of this fast moving world, and just enjoy the magic of the moment and be free.

”Wir Sind Geister” - (We are ghosts). Do you believe that ghosts are real? And if so, what is their connection to the living?

Ghosts are everywhere, we all are ghosts – in one way or another. You just need to be aware of it. The main problems are the boundaries of the modern world, that everything is about fast living – and that it is the most common sense to be a functional piece of it. Detached from this, you can live your own life and build up your own world, and this should be the highest goal for everyone.

In this state you will get to know “your” ghosts and have time to listen to them and there will be a lot of secrets unveiled by them. For example, you will get to know the ghosts of your hometown, ghosts that shaped the landscape and history of it long ago. You can see and feel them if you walk around with open eyes and ears, and you will get the feeling of nostalgia and reminiscence. But ghosts also show you the dark sides of the pasts. Everything needs to be told, and nothing shall be forgotten – the good and the bad.
…and one day you will become a ghost too.

We hope that this short interview gave you a little insight into the process that was behind the video and the music and that maybe now you can enjoy the video for “Wir Sind Geister” even more. You can pre-order the record here. And now - enjoy!

Be sure to keep an eye out here on VoS for the review of MOSAIC’s upcoming record and if you want to, you can check out our review of Secret Ambrosian Fire here.