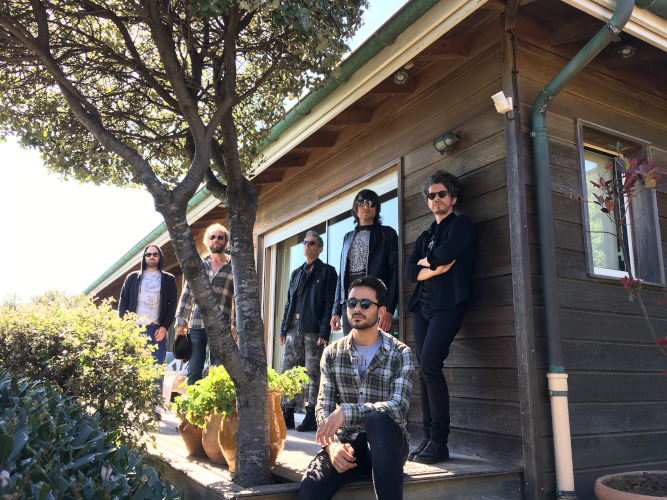 How representative should a pre-released single be? When comparing the video and song we are premiering at Veil of Sound today with the record from which it is taken, then one must say, both are not really congruent because the song is very chilled and laid back and the record definitely has its raucous moments. However, there is one common element to both and that is its mystique. Watch the video for one of the more interesting collaboration of 2021: Hifiklub, Duke Garwood and Jean-Michel Bossini and their song ”Deep As The Sun”.

What may sound like the opening to a bad joke goes as follows: A contemporary composer, a blues singer and a rock quartet get together … However, in the case of Bossini, Garwood and Hifiklub we are not talking about bad jokes, but about really serious and (more importantly) amazingly talented people who have been renown masters in their respective genres. And when you listen to their record Last Party On Earth one thing is for sure: All four involved parties – the fourth being a well-oiled string trio named Anpapié – are masters at their craft and yet do know how to create something much bigger than the sum of its parts. With this collaboration that means, that the listener can surely distinguish the parts everyone brought to the table: Bossini the wonderfully detailed little patches of sound, while Garwood clads the songs in a certain broad-brush-manner with his mighty voice somewhere between Mark Lanegan, Declan de Barra and Guy Garvey, and the real foundation of colors between straight desert-rock pickings and somewhat noisy guitar licks is being put down by Hifiklub from Toulon.

Last Party On Earth is swaying somewhat between Desert Sessions leftovers, the noisier parts of Archive’s oeuvre and the slightly ambient parts of Elbow – all of these being well-known for their respective sound-universes in which each moves with faultless security. The participants create a wonderfully mysterious record because no one can guess what kind of song will follow around the next bend. In that sense ”Deep As The Sun” is a perfect example for the record as the song’s structure is quite unusual when really thinking about what you are hearing. It might sound like a short interlude but it is much more than that. Sit back, enjoy and contemplate this Last Party On Earth - out on Subsound Records on December 7th!