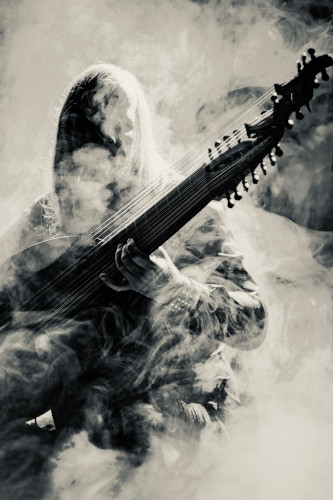 Enigma. That’s a word very often read or heard when people are talking about Jozef van Wissem, the man who brought a record back from the dead, who basically invented a genre only he fills and who has created some of the most memorable soundtracks of the last few decades. Jozef van Wissem has recently released a new record via Incunabulum Records: a score for the black and white classic Nosferatu by German movie pioneer F.W. Murnau. All of that were reason enough for us to seek an interview with the man.

There are more photos of Jozef van Wissem wearing a very characteristic hat and is mostly clad in black clothes. This shall not imply that his world only has two sides, but that he has a certain taste in clothing, lifestyle and also a pretty particular (and very good) taste in music. Even though many know him from his work with Jim Jarmusch or his releases on Consouling Sound, one should never forget that he also has a vast knowledge of music, from everything, the early modern to Baroque and to modern day music. From classical composers to Drone metal avantgardists. Enjoy our interview with the man who gave the lute a good name (again).

Jozef, thanks for doing this – you are on tour right now, so let me ask you: How have the gigs been so far and which place are you looking forward to playing the most? Any venue in particular? Any city? If so – why?

I am looking forward to playing Russia and Ukraine again. I miss them both. In Moscow I played in a huge cathedral for over 1,000 people. In Ukraine there was lute mania when I did concerts, girls would faint during the concert. I used to go to there every year and I have friends in both countries. That doesn’t compare to playing in Paradiso Amsterdam for tourists.

When you are on the road, is that a total solo concert or do you have a backing band?

I play solo. I did about 1,500 solo concerts worldwide, more shows than the Ramones did. When I go to a concert myself I prefer to see solo artists, too. You can’t hide behind your band members when you play by yourself. You are naked and pure.

According to some sources you started playing the lute at a young age, is that true? And what about the lute made you pick up this rather unusual instrument?

No. That’s not correct. I studied classical guitar at a young age. I started playing the lute when I moved to New York in my early thirties. My lute teacher Pat O’Brien was an ex-guitarist who studied with Reverend Gary Davis. He had the right attitude and made me write my own solo pieces for the instrument. That would not have happened in Europe.

Is the variability of the instrument one of the things that attracted you, its position between old and new music?

What attracted me in the instrument was the technique. It’s more difficult than the guitar. It took six years for me to master the lute. Also what attracts me is its female form. I know I am not supposed to say that. Forgive me for appreciating female forms.

Would you say that this “center” position between a baroque instrument and the possibilities of modern music making (amplification for example) make it a special thing?

Was its “transportability” also important for you? For example, you cannot carry a harpsichord or a spinet around with you all the time? And they are also instruments very much associated with the beginning of early modern music.

The transportability of the lute was important in the middle ages when it could be carried on horse back. Nowadays it’s not easy to carry on an airplane, it requires an extra seat. Not good for the environment I know.

Your way of playing the lute is quite different from what many people would think about the instrument, because you use feedback and electrical amps at times so that the sound you produce is not the thing that most (uninitiated) people would imagine, as they’d likely expect to hear a typical medieval thing like a lyre. To make it clear: how do you produce these sounds – during the writing process, in the studio and on stage?

During the writing process I use lute, guitar amps, guitars, electronics, field recordings, vocals. The same on stage. In the studio I try to update the lute with modern tools. When I play the Nosferatu score live I use all these sounds. The Bird sounds are on the computer, I ran them through some condensator effects. The 12-string electric guitar I use has an alternate tuning so you get this drone effect.

What are some of your favorite composers…
a) from the Baroque or Early Modern period? Baroque anything by Silvius Weiss

Was there any particular moment in your career where you thought ’Okay, I know got this! I know what I can get out of the lute!’ or are you still striving to find your sound?

That depends more on how good the lute is you are using. I am lucky to work with great lute builders. The sound of the lute depends on the room you play it in. I can play the same pieces but they all sound different in a different room like a church with seven seconds of reverb.

Do you consider yourself primarily a lutenist or a composer? Composer/Lutenist

Now, your new record is a score to the German black-and-white classic Nosferatu by Friedrich Wilhelm Murnau. I think that your music lends itself particularly good to black-and-white movies. Is there any other b/w movie that you would like to score?

Yes, I am working on Der Müde Tod by Fritz Lang. I saw it recently and immediately I got some musical ideas for it. It will premiere in February in Warsaw.

How were you able to sonically reproduce the sound of dying birds on the record, because that is what one hear throughout several tracks, in particular the last two?

I found a double 7 inch with bird sounds on a market and used it trough condensator effects and so on. In the movie there is the description ’The Call Of The Death Bird’<7i> in reference to Count Orlock. To me ‘the Death bird’ is today’s corona bat.

When looking at the tracklist it becomes clear that you arranged it in acts, like a classical drama. “Act 5”, the longest act, takes up basically the second half of the record. How did that happen?

Act 5 has the actual length of the ”Act 5” film part in the German version of Nosferatu. The British version (BFI) doesn’t have those numbered acts in the film. Which is confusing for me when played live.

Are there any role models for your drone sound? What do you think about acts like SunnO))), Earth or OM?

I love all of those bands.

Is it true that you first wrote your score and then watched the movie – what was/is the reason behind it?

I don’t like the reactive idea; the idea of reacting to the images. It’s for monkeys. I like to influence the atmosphere and color of a film beforehand, before they shoot.

So, is it correct to say that the score was first of all composed for the live showing and not for recording sake?

One collaboration that we might clue up for our readers – how could you “do a record” with Aleister Crowley?

I was invited by Cleopatra Records to use one of his recordings. I collect his books. It came natural. [I am] very happy with the collaboration. It’s great to work with dead writers or filmmakers. People forget sometimes Crowley can be funny too, not just occult.

Very often, one can read about the exquisite nature of your performances – for example performing in St. Petersburg at the Hermitage in front of Caravaggio’s ‘The Lute Player’. How did that make you feel?

The painting has the sheet music of this piece they made me play, I had it intabulated for the lute but in front of the audience I changed the piece. This became “You Know That I Love You”.

You also have had a new lute for a few years with the words ‘Ex Mortis’ on it, right? What do these two words mean to you, as they were also the title of your last record on Consouling Sounds?

It means I am bringing back the lute from Death. The instrument disappeared for 200 years after 1700. Back then it became to complicated to play, there were too many strings so it died out. Then it came back with the Wandervogel-movement in Germany in the early 1900s They gave guitar lutes a bad imitation.

A magazine once described you as a crossover between ’a medieval monk and a Satanist Rasputin’, how do you feel about that description?

I was sort of pleased when I read that. Now I am not so sure.

Thank you very much Jozef for your time and these might interesting answers!

You can get your copy of Jozef’s new record via the Incunabulum Records’ webshop.