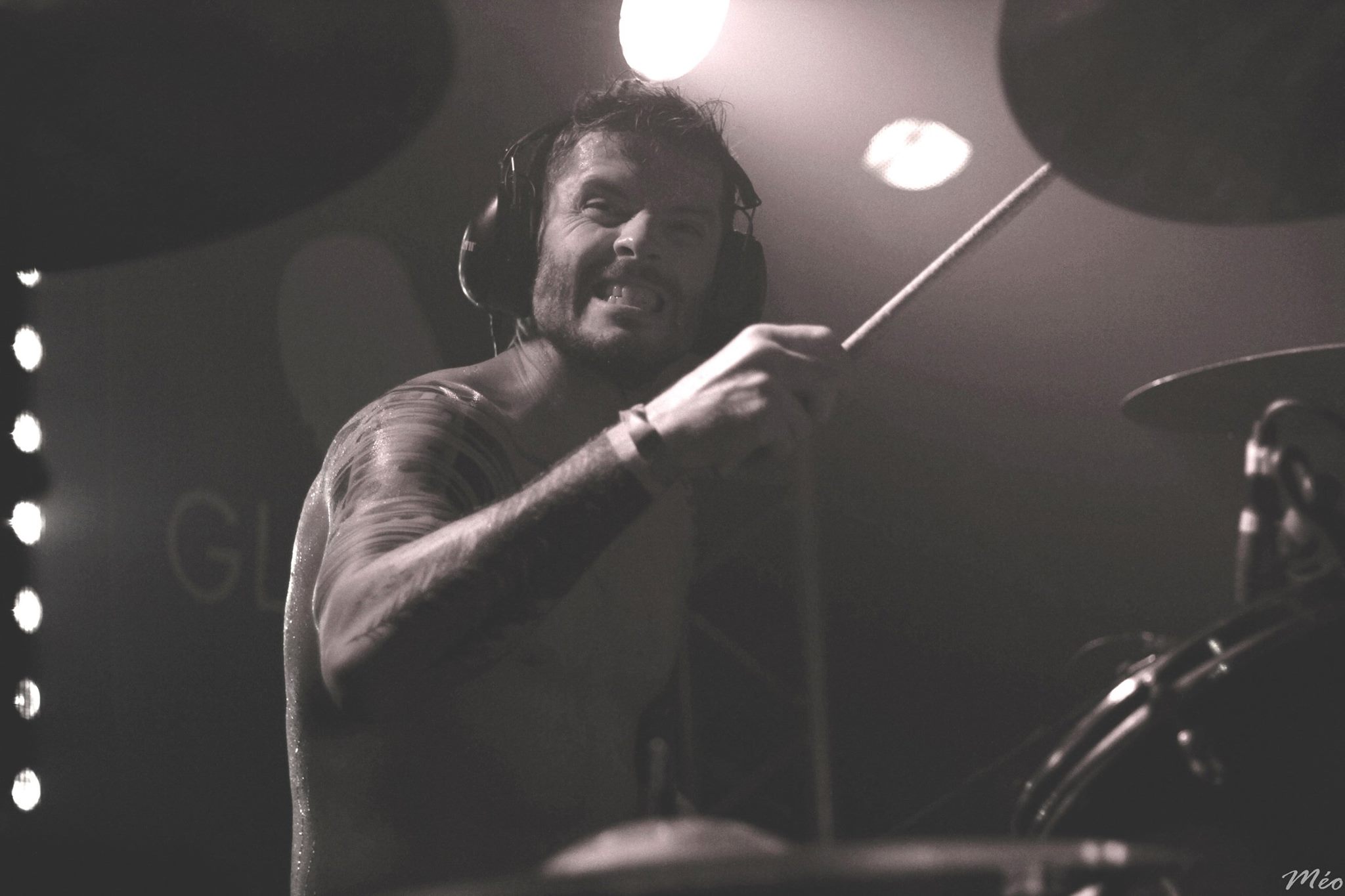 Last year there were several amazing hardcore records, but one always stood out amongst the crowd - Rien Ne Suffit by Southern French-based everything-goes, everything-kills master-class-massacre-creators Plebeian Grandstand and as it was one of the favorite records of several of the VoS beatniks we thought it was about time to talk to the band about their influences, the ideas behind their music and what we can expect from then in the future. Drummer Ivo gave us and our questions some time - we hope you enjoy the interview and don’t forget to listen to their music!

So, now that Rien Ne Suffit is out for nearly a year – how do you think the record has aged? Well or do you now see things on it which you would like to change?

I don’t think records age that fast. As for the second part of the question, I personally have some very minor regrets concerning a few rather generic metal drumming choices, by inertia and laziness, but otherwise I am still to this day extremely satisfied with 99% of the album.

The record itself is an amazing tour de force through nearly all genres of extreme music available, not only those based on guitars but also electronic-based music. How vast are the musical influences of the band combined as a whole?

Apart from the obvious extreme metal influences, we like ambient stuff like ASCENDING DIVERS or PHARMAKON, jazz such as COLTRANE or DAWN OF MIDI, hiphop music (DÄLEK for example), shoegaze, pop, noise rock (huge fan of UNSANE personally).

Can you explain your band name for our readers, as not everybody might be familiar with history?

By “plebeian” we mean “of the people”, and “grandstand” is a public place for speaking. So basically that just means we’re regular folks who express themselves publicly.

Would you say that eclecticism under the banner of extremism is one of the main ideas behind your music?

That’s a pretty accurate description of our music. We’re aiming at telling an extreme story using extreme soundscapes and emotions, and we happen to be eclectic people who would hate to overuse the good old metal clichés.

What I love about the record is the fact that you integrate so many differently accentuated forms of pauses in this blackened grindcore “bastard” – does this kind of songwriting come naturally to you as a band or is it difficult to find such structures/ways?

We’ve all been listening to complex music for a very long time so it’s natural and easy to write complex structures. The hard and challenging part is to write complex music that has a soul, through a balance of stimulation/unexpected and comfort/expected. In “extreme music”, all the “extreme” has been done, the way to stand out is “music” in my humble opinion. Same thing as a listener, I don’t get impressed by speed, technique, dissonance, complexity, or even violence anymore, I get impressed when bands manage to use those tools to write songs that stick in my head and speak to my heart. Vermis by ULCERATE really did that for me and is still in my absolute top 10.

How must one imagine your songwriting process in general – is it a democratic “free for all” or is there a main songwriter? Is it a jam-based development or rather a sharing of pre-fabricated ideas?

0% jamming. We haven’t done a real band rehearsal for over 4 years. On Rien Ne Suffit, everything started with Adrien’s lyrics, which embodied the story we wanted to tell, then the lyrics got “illustrated” with a song structure written by Simon (guitar) or me, with guitars and drums only, or even just drums, then bass, then it’s very democratic, everybody gives his opinion on everything, it takes time to optimize. That being said, some songs were modular synth first and then the rest, we didn’t apply the same recipe every time.

You “sing” in French – mostly, correct? Do you think that this way you are able to convey your ideas more effectively?

Rien Ne Suffit is the first album where we sing in French (it was English until now). As we wanted to write more meaningful lyrics, it was an obvious choice.

You are from Toulouse in Southern France – a region known for its warm, yes, hot climate. Has this year’s extreme draught affected you?

No, thank you for your concern.

Coming from such a beautiful region – how can you all be so pissed off? What ticks you off?

We don’t talk about our region, we talk about our world, our times, and we’re probably getting our anger from personal experiences and our very tempers.

Rien ne Suffit – will there ever be a moment when this extreme form of grindcore will be enough for Plebeian Grandstand?

I would see no problem in playing extremely different music in the future with PG, even very quiet one, but that would never be by concession.

Whenever I listen to the record – it seems to me that the record screams into the face of our modern society – is it more a scream against mankind or rather one against our capitalist system?

We have nothing against mankind or capitalism. We describe. We’re atmosphere makers, not activists.

You are a band for roundabout 17 years now – do you think that mankind has evolved or regressed during that time?

Both, as always, and that is precisely and exactly the subject of our album and the meaning of the sentence Rien Ne Suffit (‘’nothing is enough’’). Science in the broadest meaning always goes forward and up, but the very nature of humans, still very deeply hunter-gatherers, makes us unable to not do the same old-fashioned choices over and over. Each year that passes we’re more and more in dissonance between our simple brain and our very complicated and very “virtual” society, almost everything is becoming an “intersubjective reality” as defined by Harari. The world has become the most comfortable, safe, peaceful version in history (in the big picture of course), yet it has become impossible to fully understand and appreciate by anybody in the word. So we’re in heaven by so many standards but we’re stressed and hopeless and miserable and we destroy everything. Because we’re humans, nothing is enough.

The musical influences, as we said, must be vast – could you give us your top 5 favorite artists?

Is it just my imagination or is “Tropisme” one of the dirtiest hiphop tracks ever? Do you know something about the French hiphop scene? About acts like Biollante (which we already featured on VoS)?

I don’t know Biollante, I will give it a try. I liked Klub des Loosers a long time ago. Interesting to call that track hiphop, we never though of it like that. The central creative reference for “Tropisme” was “Irreversible” by Gaspar Noé.

How much where acts like Atari Teenage Riot, LTJ Bukem or Aphex Twin an influence on your sound? The same for Jesus Lizard, Einsturzende Neubauten or Merzbow?

I think Simon likes Einsturzende and Aphex Twin. I like Jesus Lizard. We like many things and they all shape our music.

For Rien ne Suffit you teamed up with Debemur Morti – how did the collaboration happen?

DMP approached us while we were still working on the album. We felt understood and wanted to try a fresh start and a new audience. Our departure from Throatruiner Records wasn’t anything personal, we’re still friends and wish them the best.

What can we expect next from Plebeian Grandstand? What are you up to at the moment?

Talking a bit about your home scene – Southern France. Are there any bands we should definitely check out that are not known well enough in your opinion?

Now onto our infamous quickfire round – you will get twelve questions with two alternatives from which you please choose one and maybe give a short explanation.

Pig Destroyer or Converge? Old school Converge. I especially like You Fail Me.

Beatles or Stones? Beatles. I don’t like their music but they’re absolutely great.

(To Listen to at home): Jazz or HipHop? Both and none. I love the IDEA of jazz (as well as a few artists like Ari Hoenig and E.S.T.) but I’m very picky and annoyed by random “everyone gets his solo” jazz. I also love heavy hiphop beats but 99% of the time the imagery and attitude is just waaaay too childish and pretentious for me.

Black Flag or Minor Threat? None. I have zero appreciation of first wave hardcore. Biohazard is as old as I can go.

Venom or Bathory? Same for BM. Nothing before Mayhem for me.

Noise or Metal? Metal, but I’m far from proud of it.

Roadburn or Hellfest? I suppose we’d be a better match for the Roadburn audience. We were programmed in 2020 but Covid. Hellfest we played in 2018, it was fun and very professional. I like the “Disneyland” vibe even if it suits standard metal way more.

So, those were my questions, I hope you enjoyed them. All the best and we hope to see you soon and hear some new stuff from you! Thanks for your work and the occasion to speak. Cheers. Ivo