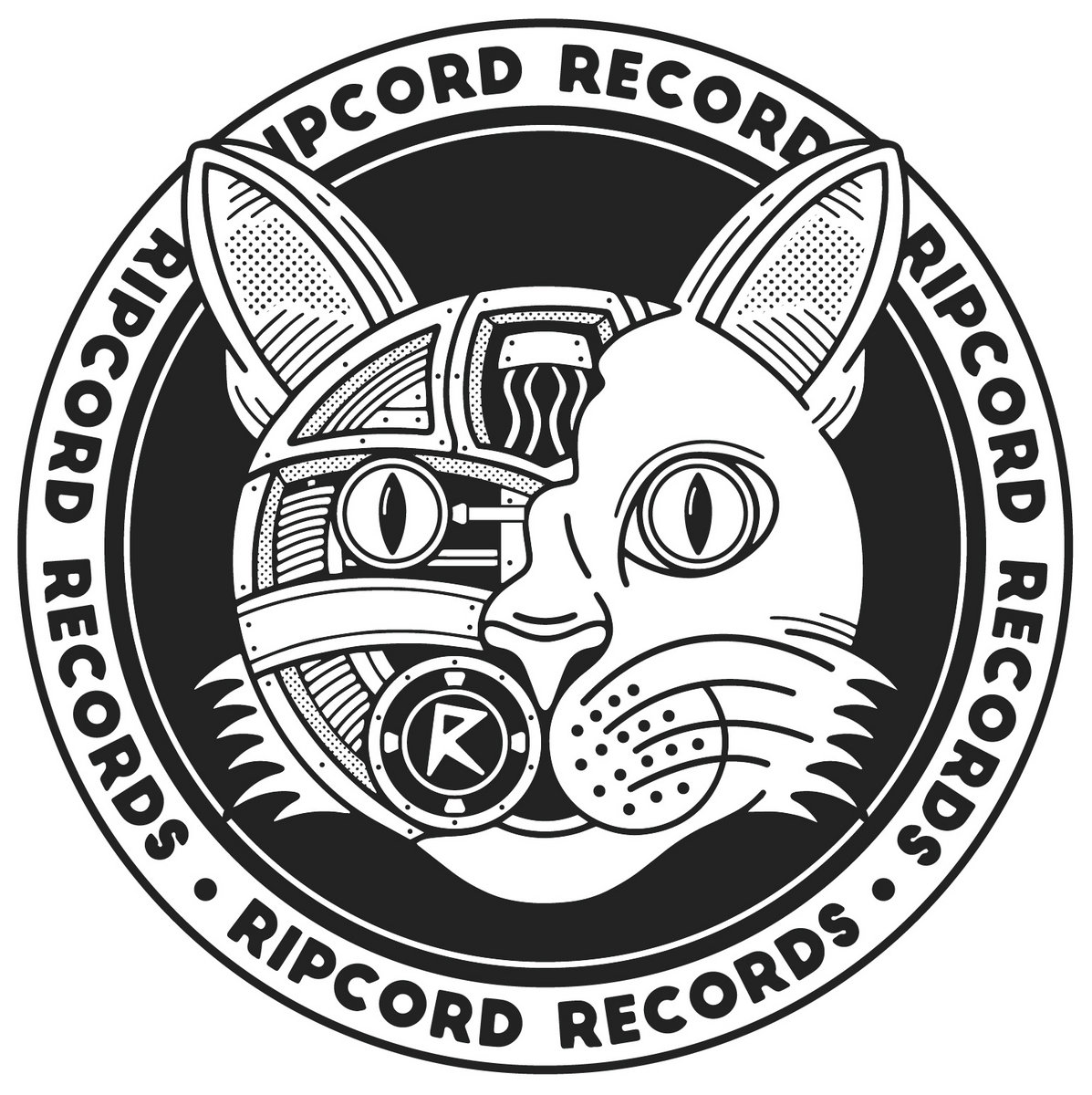 In keeping with our tradition of shining a light on the smaller, less mainstream side of things, we have a fascinating interview with Charlene from Ripcord Records and Distro and the work which goes into running such an endevour.

Ripcord Records has emerged over the last couple of years as a really reliable distro but even more meaningful as a label with a cause as many compilations were published for charitable causes, sometimes trying to help people or animals.

To get started, how long have you been running your label and distro?

The label has been running for almost 3 years and the distro for about 1.5 years.

Was there any initial spark or moment that got you started with the whole endeavor?

I was in this mindspace where I wanted to do something. I wanted to create something, be a part of something. I’d wanted to start a label since I was a teenager but obviously didn’t have the money then. I started to get into buying music on tape and I thought this might be a viable option for me so I just thought “fuck it” and decided to start my own label, beginning with tapes, in true midlife crisis fashion. It’s now evolved into CD releases and collab vinyl releases. A distro was another thing I have always wanted to do. I began thinking I’d just stock about 20 records. Now we have over 300 I think and it’s still growing. I need a bigger house!

How did your partner react, when you told him about the idea?

He was kind of cautious at first but ultimately supportive. I think he could see how passionate I was about the idea so it was pretty easy to win him over. He’s been great all the way through this, listening to any concerns I have and giving me advice where he can and lots of encouragement. It’s always great to get someone else’s perspective on things and he’s been that person for me. He’s also taken care of some of the physical aspects of the label – we used to make lyrics sheets for the tapes and he’d cut them out on the guillotine for me so he’s kind of my partner in crime. He is definitely part of Ripcord.

What physical media do you provide, and do you have any plans on branching out into other areas or merchandise?

For the label we do tapes and CDs, and vinyl in collaboration with other labels. I never planned this, it’s just happened and it’s been great. With the distro it is primarily vinyl but we do stock some CDs and tapes. We’re trying out stocking t-shirts but they aren’t selling as well as I hoped so I’m not sure if we’ll continue with that.

What has been your proudest moment so far?

Oh that’s a tough question. I’m proud of everything I’ve put out. I think the Fugazi tribute CD was a proud moment. It took about 1.5 years to organise that and I mean, it was over 40 of my favourite bands covering Fugazi! I got to work with bands and artists like Nathan Gray, La Dispute, Shai Hulud, Zao, Jonah Matranga, Tsunami Bomb, This Is Hell, Belvedere etc, etc. Loads of these really awesome bands so it was like a dream come true. I never thought I’d get to do something like that, working with all these bands and also being in email contact with Ian MacKaye about it. It was a crazy time. It was nerve-racking but incredibly rewarding and we made £4500 for an animal sanctuary charity so that was a big wow time for me.

I’m also really proud of the charity compilations we put out digitally. It’s a bit of work but always worth it. I think our last one made about £1500 for a suicide prevention charity.

You do a lot of charity releases – how did you come up with the idea?

I try to do one each year, sometimes more. I’m not sure where I got the idea but I’ve seen other labels do it. I mentioned earlier how I was wanting to “do something” and raising money for charity was something I wanted to do. So I found myself in a position where I could use music to make some cash for a good cause, while also being a promotional tool for bands. They take a bit of work. Our last one was 101 bands so you need to keep organised!

Are you already being approached by charity organisations?

We’re not approached at all from charity organisations. I just pick a charity that’s close to my heart and take it from there.

How do you choose which bands you release or distro?

For both it’s just a case of me loving the band.

For the label I really have to be head over heels in love with the band and be really passionate about their music and sometimes their work ethic too. I guess it’s quite important that the band is active and playing plenty of gigs but that’s not always a deal breaker if I love the music. Either a band will contact me or I’ll contact a band and we’ll have a bit of a chat and if that goes well we’ll go ahead with a release.

For the distro I don’t have to be madly in love with the releases but I still have to like them.

What lessons have you learnt along the way?

Oh gosh, I’ve learnt so much about the process of releasing a record and I’m still learning. When I first started I was clueless and I just learnt as I went along. Quite a massive amount of work goes into a record before its release, both from the band and the label. I’ve learnt how important it is to be organised but luckily I love spreadsheets so that’s all good :) I’ve learnt how to be better at compromising and how important communication is between band and label. I see releasing a record as a collaborative endeavor. It’s basically teamwork. I’ve also learnt that sometimes you have to say “no” to a band for various reasons. I wish I could work with every band that contacts me but it’s just not possible.

Do you have a set style of music you release?

We pretty much cover post-rock, math rock, post-metal, black metal, but ultimately anything I love is a possibility. I have punk in my blood so that’s always an option. The distro is the same but leans more heavily to the metal side of things, not through choice – it just ended up that way.

How difficult is it to organise the albums of covers you release?

For covers we’ve only done the Fugazi tribute. To be honest, it was a huge amount of work spanning over 1.5 years. Coordinating 44 bands and trying to get them all to record and submit a track for a certain date is mental. And there’s all the work around that – getting blurbs from the bands for the booklet, getting artwork done, keeping the bands informed, organising premieres and other press. Many spreadsheets were created! Haha.

How did the artwork for the label come about?

Do you mean the logo? It was designed by Bloodflower Design. I’m not very imaginative when it comes to design so since I like cats I was just like “hey, can you draw me a cyborg cat?” and that’s what she came up with. I think it’s awesome what she designed but I’m afraid it has no deeper meaning than to try and look cool :)

Do you go to live music? And if so, who was the last band you went to see?

I haven’t actually been to a gig since before lockdown and the last one was Petrol Girls. It might sound weird but I’m starting to feel too old for gigs! I have tickets for Machine Head and Amenra though and I have a big list of gigs that I’m interested in seeing. Bands like Godspeed, Conjurer, Calligram, Ithaca, Cave In, Fuath, Black Flag, Crippled Black Phoenix, Holy Fawn and more are all playing so I really should get out of the house!

If you could curate a one-day-festival – which bands would play and why?

It’d be a Ripcord Fest! Haha. Honestly I’d love to get a pile of Ripcord bands to play an all-dayer or half-dayer. Alternately, I’d get an intimate show with System Of A Down, Mongol Horde, Amenra, Chat Pile, Boysetsfire, White Ward, Chvrches, Oranssi Pazuzu, Envy and This Will Destroy You. How’s that for a mish-mash? :)

What has been the best piece of advice you’ve been given in relation to the label, and who gave it?

I’ve been given so much advice but I need to give a shout out to Dan from Callous Records. At the very beginning, before I’d released anything, he gave me so much help and advice about putting out tapes. I don’t think Ripcord Records would exist if it wasn’t for him.

I also respect the way Dischord run their label. No contracts etc. We don’t do contracts, we base everything on trust and friendship and so far that’s served us well. Once you bring in lawyers I think it just sucks the fun out of everything, you know?

Last regular question, what can we expect next from Ripcord Records?

I have 4 more releases for the rest of the year: 1 tape and 3 vinyl. The next release is by a post-punk/alt rock band called Break To Broken, which is a little bit of a departure for me but I think they’re amazing. That’ll be on tape. I just got them in yesterday and they look awesome too!

For the distro, I just plan on getting in more releases and try to grow it the best that I can. I’m open to people contacting me to tell me what they’d like to see stocked and I do my best to get them. I’ve actually discovered bands myself from people suggesting records so that’s great. There are many amazing records in the EU or further afield and we try to get those in so people don’t have to pay crazy money on postage, importing them to the UK.

Now onto our quickfire round:
Wine or Beer? Beer but it has to be a New England IPA.

Analogue or digital? Both have their place… hmm, digital.

Vinyl or streaming? Again both have their place but I have to say vinyl.

You can all check out, no wait - you should (!) all check Ripcord’s Bandcamp presence here,especially if you live in Great Britain!