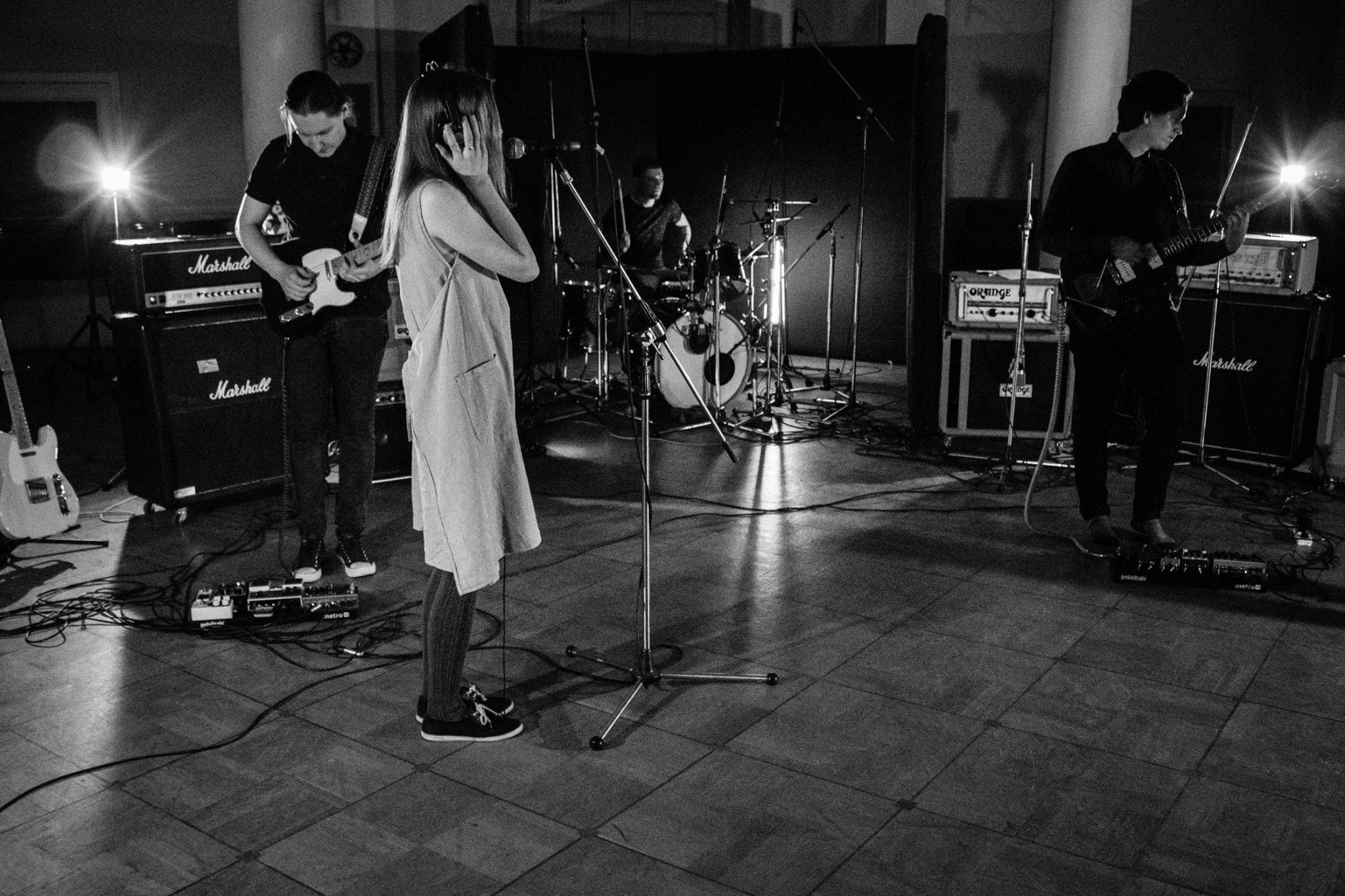 Day 7 – Blankenberge is one of those up-and-coming bands that you should watch if you ever had a heart for a sound somewhere between pure beauty and enormous strength, a band that embraces the sound of a band like Slowdive and My Bloody Valentine: Shoegaze. This wonderful, harmonious, elegant sound that seemingly is able to slow down your heart while at the same time filling it with joy.

This is one of those bands that just do not get enough attention, because – if you listen to the band for some time – you will be hard pressed to find a band like this one. As well-articulated in their sound and tuning, as well-balanced in their songwriting. And that is surely more than enough reason for us to include this band-to-watch in our interview-marathon.

So, let’s start with the name first – it is a known fact that you named your band after a town in Belgium. But why exactly this town?

Yana It was in this city that we saw the real sea for the first time in our life, and it was an amazing experience. Our sound reminds us of the sea, so we put the two together and gave the band that name.

Daniil When we were choosing a name for the band, we just remembered about such a good trip to this city and the choice became obvious.

Is it true that you got the name for the band while you still lived in Siberia?

Yana I don’t remember exactly when we decided to name the band like this but we had visited Blankenberge before we moved from Siberia, that is a fact.

Daniil No. For the first time such a name was established after moving to St. Petersburg. I posted the demo tracks on the social network and so called the band.

How must we envision the Siberian “music scene”? Is there one? How is it interconnected?

Yana It is very cool to be a musician in Siberia because just a few big musicians reach that region and when you make music there you feel like you are a superstar and it seems like a lot of people know you. I don’t feel this way in a big city because there are a lot of local musicians here and also a lot of very popular bands come here. I think this fact influences the Siberian scene in a way that you can do whatever you want and play any music of any genre – it will be well received anyway there.

Daniil There is a lot of good music in Siberia now. Sometimes bands stay there, but sometimes the whole band moves to the big cities like Moscow or Saint-Petersburg.

Would you say that having lived in Siberia has made you, Daniil and Yana very self-reliant persons?

Yana I think not only the place where you were born makes you who you are but “the whole picture” and all the circumstances of your life and everything that surrounds you.

Daniil This question sounds like as if Siberia was a very difficult zone for survival or something :D There are ordinary cities and towns, just the weather is less friendly. I think that after the move I became more independent.

How difficult was it to open up to the other three members when you got together? Because you two of course already were some kind of unit and then three people joined that unit?

Daniil I knew Dima and Dayan long before the founding of the band. We bought pedals from each other and mailed them. And of course we discussed various guitar equipment. When I arrived in St. Petersburg, I immediately wrote to the guys and offered to play shoegaze together. Later we were lucky to meet Sergey and he agreed to play with us. We quickly “found a common language” and it turned out that he and I had the same tattoos with the Joy Division album cover.

No band member seems to have been working with any other band or project – according to my research. Is that correct?

Daniil When I lived in Barnaul I played in three or four post-rock / screamo bands. We have recorded EPs and albums.

Yana I am going to release a solo album but I have not enough time to finish the songs that I composed for that because we are working on Blankenberge music hard now. I hope I will release it someday.

How can that happen in St. Petersburg, a city with one of the most thriving scenes in all of Europe and members from many bands working together in bands like Olhava, Trna, Show Me A Dinosaur?

Daniil We were very lucky that the guys from Dinosaur and Trna recommended us to the Elusive sound label. We are still grateful to them for this. They also always help us from the very beginning with various tips for organizing tours and working with a label or merch.

Which other St. Petersburg (or generally speaking Russian) bands should we check out?

Russia is the biggest country in the world, spanning eleven or twelve time zones and you have moved across many of those – is it more difficult to tour Russia than to tour Europe?

Daniil There is a very long distance between major cities. But we didn’t go on tours in Russia at all.

Yana It would be more difficult because the cities are so far away from each other. So we didn’t have a tour in Russia yet, just played in Moscow once.

In which way does St. Petersburg influence you and your music, Daniil and Yana?

Daniil The euphoria from the move has long since passed. The atmosphere in the house is most influential now, especially during the lockdown. And probably our studio where we rehearse also influences us. We now have a great view of the Neva River from the window.

Why did you choose St. Petersburg and not Moscow?

Daniil As a child, I often visited Moscow and I did not like this city because of the crowded and busy traffic jams. Petersburg seemed calmer to me. I still think that this is the most beautiful city in Russia.

Yana I think me and Daniil moved to Saint-Petersburg just because we had some friends here. It is also a popular city for migration from smaller cities of Russia now so a lot of interesting people come here to develop their art.

Now to your music – whenever I talk to people about Blankenberge, one term that is always used is “dreamy”. Do you want to create music to dream to?

Daniil I would say that in noisy guitars I hear love.

Yana I like that our music is somewhere above daily life.

If you should describe your music to other people by using three adjectives – which ones would you choose and why?

Daniil Shimmering, biting and dynamic. These are important criteria for songwriting.

Could you explain to me in simple words how you (technically) create the amazing soundscape behind your songs?

Daniil In the guitar It does Strymon Big Sky.

How long did it take you to come up with the Blankenberge-sound?

Daniil We didn’t invent it on purpose. It happened by itself. But in fact, I have a book in which everything is written down and I will not show it to anyone!

When looking at your discography one thing is quickly evident – Everything is in some ways a new beginning because the cover is very different to the ones before even though it still plays with the geometrical shapes but it arranges them much less symmetrical. Was that a conscious decision?

Daniil We try to bring something new to the music, but at the same time we don’t want to get too far away from the first albums. We like what came before, but we don’t want to stand still. The third album had a new approach to songwriting and a new recording process. These songs are one hundred percent studio songs because we never performed with them.

Yana – you contribute to the songs with your vocals, how do you go about: Do you write concrete lyrics or do you rather try to add another layer of sound to the songs?

Daniil After Yana records the demo vocals, the song is transformed for the better!

Yana I write my lyrics after Daniil sends me a demo of a future song. I try to compose some melody and put the lyrics at the same time. Usually some ideas come to me after the very first listen of a demo track.

Whenever I listen to your songs I have a feeling of standing at the water’s edge looking into the vastness of the ocean in front of me. Is this vastness, this open-ness something that you want to achieve in people?

Daniil The theme of the beauty of nature is important to us. In such simple things as the seashore, sunset or dawn, there is something big and magical. It is important for me that when listening to music there is a feeling of warm immersion in universal love.

The way that you incorporate heavy riffing and drumming into your songs (for example on “Fragile”) is very extraordinary because the songs are heavy and yet they never clobber the listener over the head. How do you create the elegance in the songs?

Daniil This track uses a classic harmony from many heavy, sad songs (C – G# infinity). Here in the music there is tension, but at the same time, there remains calmness that does not flow into some loud noise. But the vocals at the same time go free flight and many additional loops appear.

What can we expect from Blankenberge for the upcoming record release? Will it be released through Elusive Sound again?

Daniil The new album will be self-released on vinyl. Also we released More on vinyl by ourselves. Only our first album, Radiogaze, was released by Elusive Sound.

Now, I know you covered The Cure’s “Pictures of You” once – is that a big influence on you?

Yana Yes, absolutely. When I listen to it now I can’t believe how cool it sounds. The Cure is one of my main influences for sure.

Daniil It was a great experience and we were open to any experimentation. Later, thanks to this track, we wrote the song ”Hopeless”.

Which other artists influence you? Personally and as a band?

Yana Sigur Ros, I think we all like their music. Personally I also like bands Metric and Placebo very much and they influenced me a lot.

Daniil I was influenced by Mogwai and Sigur Ros. These are the bands that I don’t get fed up with.

Yana To have a show in every country in the world where we have at least one listener (just dreaming for now).

Daniil I have no ultimate goal. The most important thing is to keep writing songs. We’re not looking for a label at the moment. For now, we are comfortable doing everything ourselves.

The mountains or the seaside (for vacations)?
Yana Seaside
Daniil Seaside