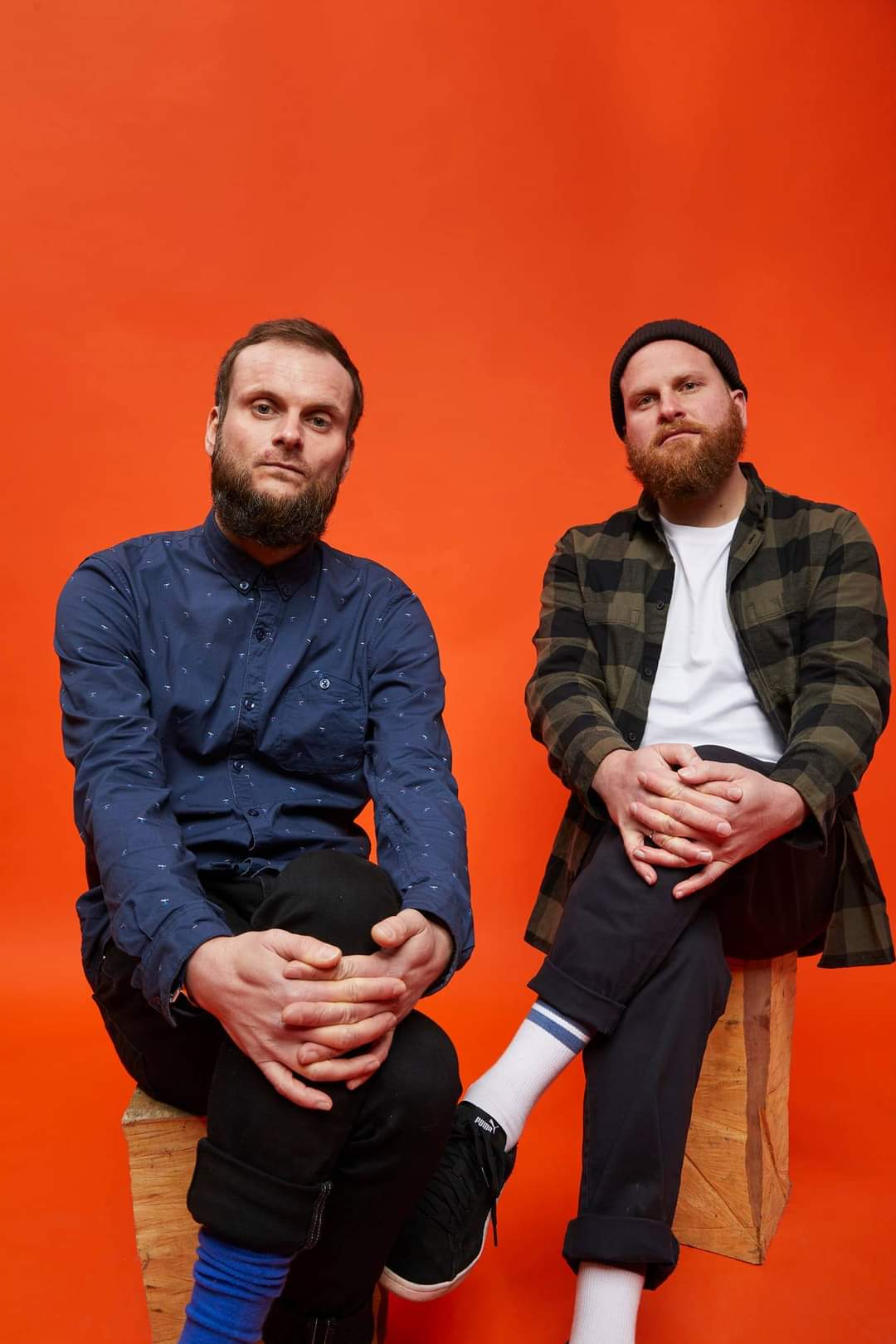 A few days ago we premiered the new video for Franconian Neo-Krautrock-band Zement and the hilariously funny video just blew us away. Reason enough to talk with the band about the video, their new record and more!

First of all, of course, how did Zement came to be? How did you two become a band?

Christian and I are long time friends! We know each other for over 20 years and had our first band together when we were teenagers. We’ve always stayed in touch and had the idea to form a band again. We’ve always had the same bands and music styles we liked and so it was clear that we would play in a band together again sooner or later! In 2013 we met in the rehearsal room and started to work on some new material. That later became Zement.

Then I must ask about the dichotomy between your name and your music – your name sounds like Hardcore Punk but your sound is very different. Why did you choose that name? What is the message behind it?

It´s a nice word and it raises a lot of associations. We also wanted to have a name which stands in some sort of Krautrock tradition. Zement is also the name of a piece from Heiner Müller, whose work we also like.

Was there ever a moment when people got your sound and your name confused?

Actually, a lot of people ask us, if we had something to do with Zement (in English: concrete) in our day-jobs, but we haven’t. We even got a request if we wanted to play at a company event of a cement-factory in Austria. Such things happen sometimes. But there were never moments when people thought we would play some different kind of music or such a thing.

What was your inspiration to make music in general? Which kind of music did you two make before Zement (if any)?

That’s a good question. Music was always there. As I mentioned before we had our first band together when we were like 14 years old. That was a classic Punk-band I would say. From then on, we’ve always kept playing music together with other people. Later on, other music genres got more important and we played in different bands, from punk to electronic music, even some rap-music. In the last 20 years we’ve always played in bands or did solo music-projects, some more or less successful.

Your music is often connected to German Krautrock – how important is that kind of music to you?

When we started this band, it was the main inspiration. Bands like Neu!, Can or Ash Ra Temple had a big influence in the beginning when we started to find our own sound. When I first heard ”Hallogallo” by Neu! it was mind-blowing! But in the meantime, other influences got more and more important to us. But I think you can still hear in our music, that these bands had an impact on our sound. We try to transport the sound and ideas from these bands to this century with our own style.

What is your favorite Krautrock band and why? Is there a special album you admire?

That’s a tough one! Neu! and Can are those two bands who had the biggest impact on me and my music I would say. Just because of their unique sound and musical approach. It still sounds so fresh and new when you hear their records! The first Neu! album is a killer-Record, also Tago Mago from Can.

Yes of course! Camera, Föllakzoid or Maserati for example. There are a lot of exciting bands out there who play some sort of Krautrock with different approaches.

How must we envision your writing process? Is it a jam thing or rather structured?

Both! Most of the time one of us has an idea, which he brings to the rehearsal room. Then we jam around with this idea and start to built something. Most of the ideas become more and more focused the more often we play with them. In the end, they are finished in the studio, where we often record some jam-based basic-tracks and then produce the rest till the song is finished.

I guess that your music needs a certain kind of production – so that it can sound as organic as it does in the end. How do you go about recording your tracks?

In the past, we often recorded our songs more or less live, improvised, like on our first album Werk. In the meantime the process has changed a little bit. Most of the time we record some basic tracks, containing the drums, rhythm guitars or basic synth lines. On top of that comes the rest. This is where the producing process starts. Often we have a clear idea how the song should sound at the end, but you have to try different ideas to get there. Sometimes we don´t have any idea how we get there how the song sounds in the end. That’s the magic of the work in the studio and the help from friends like Florian Helleken, who produced our new album Rohstoff. He came up with some very nice ideas, which helped us a lot, that the albums sounds as it sounds in the end.

Now, one of your tracks is called “Ecke 54” - who of you is the football fan? Which is your favorite team?

Hehe, actually the title has nothing to do with football, it was just a funny name and the song is in a 5/4 pulse, so one thing came to another. All the titles have something to do with the album title Rohstoff, so now the people can guess what “Ecke 54” has to do with it. But yes, I like football and my favorite team is FC St. Pauli.

Who came up with the hilarious idea for the video for “Entzücken”? How was the video done?

Our friend Heci from the band Datashock and the video production team ‘Keine Zeit Medien’ came up with it. When I first asked him if they wanted to do a video for us again, he had been carrying this idea with him for some time and “Entzücken” was finally a song which was long enough to do it! Then they set up the video-set a few weeks later and filmed it! With real hot noodles by the way!

One track is called “Goa” - is it a reference to the Indian region or to the style of dance music?

More the region than the music, but in the end the music of the song reminds some people of the dance music style, which is also okay for us. We even played at a Goa-Party once, the people totally tripped to our music, haha!

Living in Würzburg – a very interesting city by the way – how must we imagine your everyday life? What are your daytime jobs and how often do you two meet?

We both work in the social sector, I´m a social worker and Christian is working with people with disabilities. I don´t live in Würzburg any more, I live in Nürnberg for a few years now, but we still meet each other a couple of times every month, mostly to rehearse.

How do you two blend in with the very diverse music scene in Würzburg?

We have good connections and friends in Würzburg and played a lot of shows together with other bands from there in the past. I organized a lot of shows in Würzburg together with the concert group xyeahx shows at the venues Cairo and Kellerperle, back then when I lived there. We still have our rehearsal room in Würzburg and share it with our friends Hildegard von Binge-Drinking, who will also release a new album soon! You should definitely check them out!

Do you see the constellation of being a duo as a chance or as an obstacle? How about the live context?

For me it’s definitely a chance, because we can arrive at decisions faster and act faster, as we had to if we were four or five persons in the band. As I mentioned before, Christian and I know each other for a long time and I would say, we’ve developed a specific kind of collaboration and work-flow together when we make music and also on a personal level. That makes it very easy and productive in this band-context. It´s awesome to have this friendship and this musical relationship all in once!

You have already released several live tracks – do you record every set you play? Or was that recording done with a later release in mind?

No, we don´t record every set we play. Sometimes there is a chance to record the show and then we use it! But the idea to release these recordings always comes later, after we heard them and think they are good enough to release them.

How important is playing live for you? What was the best live experience you had?

Very important, we miss playing live! For us, this is a big part of being in a band. To come around, meet nice people, get together and have a good time! We played a lot in the last years, so there are many great experiences to mention! To name one, playing at Herzberg Festival on a Friday at midnight and the whole crowd, some hundred people, were dancing and totally freaking out, that was a special moment!

What is the next concert you are looking forward to – as a concert visitor? Who would you like to see?

I hope I can see Bruce Springsteen again! Maybe not what you would expected, but I saw him live once and it was probably on of the best concerts in my life!

With whom would you guys ever love to collaborate?

I always like to make music with friends, with people whose the music I like. So, I did a lot of collaborations in the past and we will do that in future for sure. To name a big name, i would love to play some music with Shabaka Hutchings. At the moment I totally love what he does!

Now onto our quickfire round:

Popol Vuh or Can?

Sauerkraut with Sausage or with a Sunday Roast?

I’m a vegetarian, but if I had to decide I would go for sausage!

Pils! (A German/Czech kind of beer)

Covers – an homage to an artist one admires or a cheap way to fill an album?

Homage to an artist!

The Mars Volta or Santana?

Thank you two for doing this, all the best and thanks for your time,

Thank you and thanks a lot for your interest!

Here is the video for “Entzücken”: