Interview with Planning For Burial 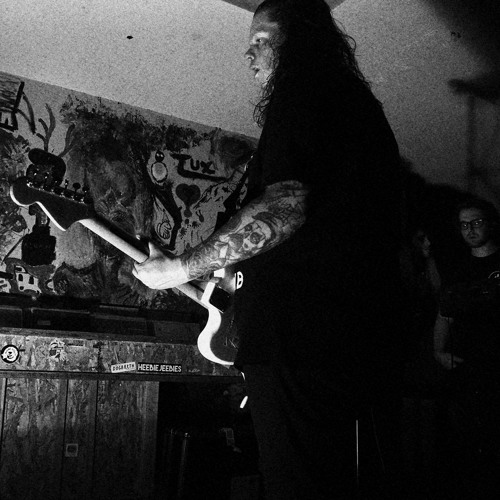 Planning For Burial is one of those “bands’ bands” - acts that influence other people so much that they start playing and writing music themselves. There are quite a few of these bands in musical history - the Kinks or Depeche Mode but also Devo or McLusky. Planning For Burial is another one. Question remains - how?

When watching a show by Planning For Burial one thing becomes clear - this act is not the most extrovert. However, when closing your eyes while he lays out his music, one cannot be but in awe. There are elements of shoegaze, noise, ambient, drone and all of that clad in music that borders on pop because there are melodies; wonderful, mesmerizing melodies! Therefore we are really happy that we are able to present you with this interview. Note: the interview was done several months ago, so do not expect anything on the effects of the pandemic or anything else.

Having tried to find the roots of your artistic endeavours it becomes clear that everything you released came out under the moniker (Planning for) Burial – did I get that right?

I started Planning For Burial in my very early 20s so it has taken up a big part of my life already, most everything before that were local bands with hand made CDRs during an age of the internet that has seemed to have been erased with time.

How did you stumble across that name? Was the music really intended to be used at a funeral?

The name is a reference to being 13 years old and witnessing my grandfather stricken with grief and a broken heart let himself go after my grandmothers sudden death, cancer took him just 6 months later. He was ready to die and had made his own funeral/burial arrangements and to me even now, that is the most brutal thing to ever do. As far as the music is concerned it was never meant to be a certain sound.

There is a difference between a burial and a funeral, the latter being much more ceremonious. Would you choose a burial or a funeral for yourself?

Send my body to the incinerator, if anyone feels the need to mourn over me, I’d rather them do it more in the terms of a celebration and maybe I’ll leave a list of my favorite songs that they can listen to together while drinking some whiskey.

I always wonder if your hometown in semi-rural Pennsylvania contributes to your music. Do you think PfB is only possible in a place like that or would it come out the same way if you lived in Philadelphia or NYC?

The project actually started in the suburbs of New Jersey where I lived for the first nine years of the project, but a lot of people associated me with either Philadelphia or NYC because of how much I would play there early on in my “career”. I think being in the suburbs allowed me to the freedom to experiment more because I had a basement and I wasn’t worried about disturbing a wall sharing neighbor with sheer volume all the time. Now that I live back in rural Pennsylvania, its a bit a different I have even more space to do what I want, but I’m not sure if I had started here that it would’ve helped. In NJ I was much closer to both Philly and NYC so I could play there much easier, there is a scene here in Wilkes-Barre filled with various genres and a lot of people doing amazing things, and I definitely have a very small audience here, but at the same time I don’t believe that many people outside of them get what I’m trying to do.

Watching you perform is quite a unique experience because you are able to bring all your sounds on stage single-handedly. How do you train for that moment on stage? Are there limitations in connection to, for example, the choice of songs?

I practice much in the way a normal band would, I work on playing and singing the songs in the basement to help me know when I have to hit certain triggers or pedals, and after awhile I’ve played a set so many times it becomes second nature and I could not touch my gear for weeks and still show up and play the songs. A Lot of older material was written and recorded in a way that I never thought about playing them live, so slowly over the years I have started to re-learn some of those songs so I can make new “versions” of them to play live, but most of the time I’m looking forward to what’s next.

Your music is very hard to define, I’ve seen people label you as drone, as shoegaze but also something very different like dream-pop or (ambient) soul. I know you do not want to label your own music but where does this unique sound come from?

I think it might just come from having influences from all over the spectrum that I’m constantly trying to mash together.

What are your sources of inspiration? Which music moves you?

I mainly try to write lyrically and sonically how I feel at any given time. Also I think music that moves me is always evolving so it’s really hard to pinpoint.

You are very active online – how active are you offline?

I’m guessing this may have to do with going to shows etc I try to support the little local scene we have here in Northeastern Pennsylvania as much as I can, and depending on the time of the year and my work schedule I get out to Brooklyn and Philadelphia as much as I can to see friends as they come through on tour, but it’s not always possible with the distance.

Does that reflect in your music?

I often find myself sitting on the side of the stage listening to bands and smiling because there’s nothing I enjoy more in life than getting to see music performed.

To me, your music always had a high pop sensitivity, the gazey elements that add up to a kind of soul-iness. Is that just my twisted perception or is there really something intentional behind it? If so, where does that come from?

Nothing I do is done intentionally, but I grew up listening to music in there 90s where a lot of bands had a heavier side while also remaining melodic and that has always stuck with me.

Live or studio? They each have their benefits

Vacation at home or far away? Again both have their benefits

Skyroof terrace bar or jetty by the lake? By the lake

Straight edge - yes or no? No but if yes that’s okay

Would you call yourself a (musical) nerd?

I think a few years ago I would [have] consider myself one, but now I’m not sure. I don’t find an album from a band then dive into the entire discographies as much as I used too, I also don’t really like getting into all the discourse around music as much as I did in my late teens and early 20s, but I still buy music constantly and will try and hit up a record store in every town I visit on tour.

I would like to know how you evolved musically over the course of time. How did you get into music? Were there any specific records, labels, sounds, songs that ignited that passion?

MTV still played a lot of great music when I was growing up and also having friends with older brothers into cool stuff and my own older sister helped steer me in some form of direction. Anything that was darker, had a heavier side and cool production is what I gravitated at an early age, Nine Inch Nails, The Cure, Marilyn Manson, The Smashing Pumpkins, Garbage, Type O Negative, White Zombie, Nirvana. Somewhere around 11 years old I decided I wanted to play guitar and begged my parents.

Is there any specific musician that you try to follow?

I love the work of Phil Elverum. His art, his production his willingness just to do whatever he wants whenever he wants. Too me thats a true punk attitude to live by.

Comparing your musical output one can definitely witness a change – does that correspond to a changing musical taste?

My musical tastes are always changing while also staying the same, I know that’s a bit confusing. I love artists who grow over time but still hold a piece of whatever it is that made you pay attention in the first place. I hope that I am following that path, and not remaining stagnant.

How can I imagine your creative process? Is is strict (like you have to set yourself real times for writing, rehearsing, composing, recording, etc.) or rather open and fluent (no timeframes, no pressure, no nothing)?

I work on music whenever the feeling comes to me, and sometimes I don’t even do that. I can spend whole days working on a piece and then not touch it again for days or months, but when I do its because I have the feeling that I need to get something out and I’m not being forced to do anything, so I think it translates the emotion better.

Thanks for all the time and the really interesting insights you provided us with!

Now for all of you who are not familiar with Planning for Burial, here you can find his Bandcamp account.