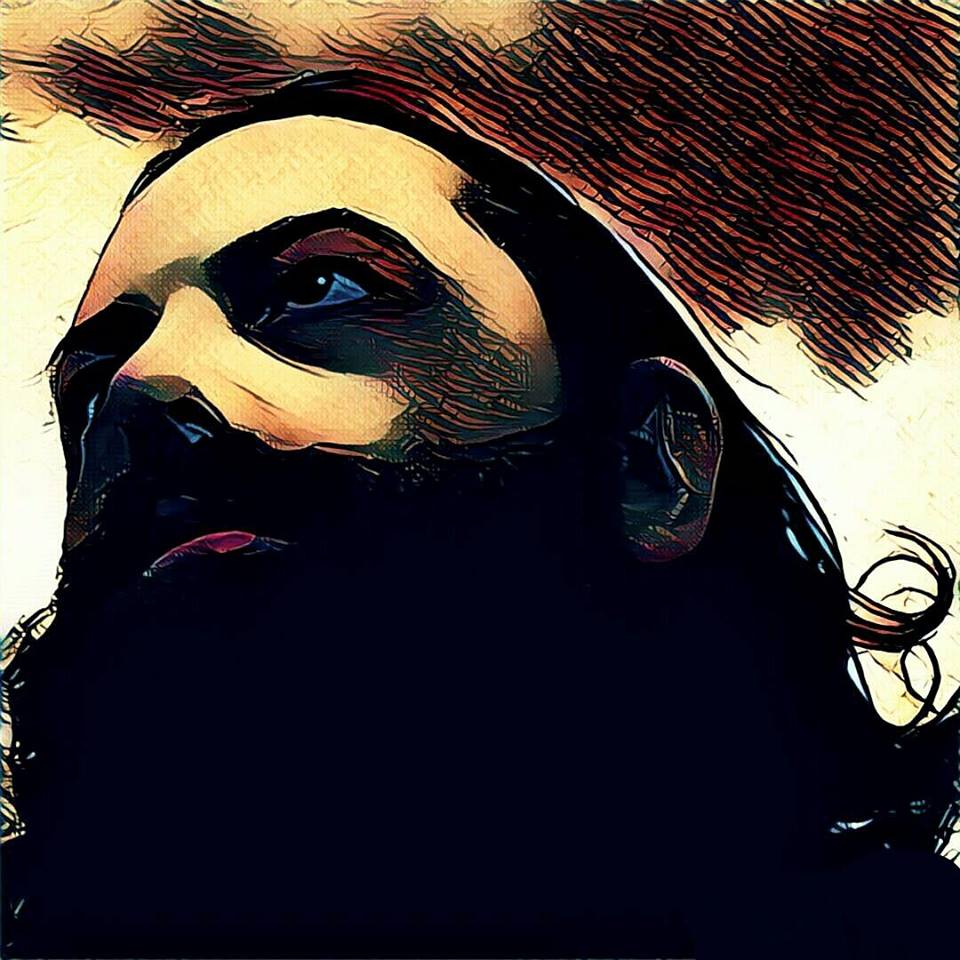 We are honored to have one of the most influential mastering engineers of our time for our third installment of the Unsung Heroes-series. If we add that he was in two bands whose influence cannot be overstated this is even better!

The list of records he was involved in might be the longest we ever had (and might ever have) here at VoS, because even Discogs is not able to give a full and complete list. James Plotkin has simply been involved in too many things over the course of his near 40-year-long career. Four decades during which he was a part of OLD AND of Khanate, both legends in the extreme music underground. Four decades for him to to be seen as THE mastering engineer of our times, working wth a multitude of diverse bands such as KK Null, Earth, Sunn O))), ISIS, Nadja and Merzbow but also Tombs, Planks, Daturah, Peter Broderick, Omega Massif or Zu! James sat down and answered our questions very patiently and in detail.

James, would you feel flattered or annoyed, if I call you one of the forerunners of intelligent and innovative mastering over the last twenty-some years?

Possibly flattered, maybe a little embarrassed. There are many people doing amazing audio work – even more so these days with the affordability of the necessary tools.

Maybe you could explain to our readers your position as mastering engineer within the production process?

There are a lot of variables regarding the degree of my involvement on both a technical and creative level. Some clients want a very transparent, technical master. Others want radical changes to their recordings. Some jobs involve restoration or complex editing. One of the aspects of the work that keeps me interested and engaged is the constantly varying requirements. It either keeps you sharp or weeds you out.

I found this interesting quote on the web: “No two pieces of music will ever the be the same, so each mastering project has to be approached on its own merit.” Would you agree?

Absolutely - this is even more relevant with the surge of DIY/home production in recent years. The possibility of online transfers of large files also means that people are being exposed to a much larger palette of music these days. It’s now common for a mastering engineer to work on releases across a vast amount of genres from any area of the globe – these recordings will likely have radically differing sonic and technical characteristics and will need to be approached according to their individual needs.

How do you think about the tendency of over-produced records?

If it suits the music, I have no issue with it. Taste will always be subjective.

What is your attitude to loudness – is “the louder the better” a valid idea when mastering a record?

It depends on the format of the recording and the release. The analog format gives you a lot more reasons to push levels into the red, but pushing a digital master too hard will inevitably ruin it. Although I will always err against excessive loudness, there is a time and place for it. Some artists actually want their music to be physically painful.

To what extent do you influence the dynamics of a record?

I like to retain dynamics as much as possible, unless otherwise requested. I’m still a big fan of using a playback system volume control to set proper listening levels!

Whenever I envision a mastering engineer I have an image in my head of a geeky guy who sits in a room more or less isolated from the outside with a huge set of speakers and who tries to pinpoint each single noise on the record. To what extent is this mental image a valid one?

It’s definitely part of the picture. Most people don’t realize that sound processing is only one stage of mastering – it also involves mundane tasks like editing, sequencing, a lot of typing, building production masters for various delivery formats, etc.

Must a good mastering engineer also have been a good musician at some point?

Plenty of people understand sound and the technical aspect of audio production without knowing how to play an instrument. There are fantastic producers in the business that are also lackluster musicians and artists. I wouldn’t say it couldn’t help, in any case.

Is it important if a mastering engineer has been part of a band – must he have a thorough knowledge of playing in a band?

It might help, but I don’t think it’s a necessity. He merely needs to know his tools and the job he needs to do.

While doing research for this interview it struck me that there are quite often some longer gaps between the releases of your own work, especially after 2007. How did this happen?

I started taking on much more technical work around that time, which made finding the time to work on my own music a lot more difficult. I think most artists go through a period where they are furiously trying to document everything they are doing – I certainly was at one point, though I have to mention that my long-term goal was to do studio work for a living.

I’ve seen that you released a number of Archive-records in 2017 – how did that came to life?

In the process of moving, I unearthed a box of DAT tapes containing around 60 hours of unreleased music. I would never expect a label to want to release such a large, disorganized collection of music so I put a good portion of it on Bandcamp to make it available to anyone that is interested. I’m always sitting on at least a few dozen hours of unreleased music…

How did you become a musician? Who sparked that fire in you?

I was too young to remember. I started taking piano lessons at age 4, learned the saxophone at age 9, and guitar at 12 or 13. I worshipped hard rock and heavy metal as a kid – most people never grow out of it.

When did you start mastering? Why?

I started around 2000, “re-mastering” some of my favorite albums for my own listening. If I listened to a record I loved and thought it needed something, I’d work on it for my own enjoyment. I had already been recording and mixing my own music for over 10 years at that point and knew the tools and the process. I had lost a day job and figured that in addition to selling things from collections to make ends meet, I would start to offer mastering services with a post of the old Southern Lord forum – that was the 1 and only time I advertised my work. It just snowballed from there.

Now, you have been a member of bands as diverse as Regurgitation, OLD and also Khanate? Your musical development starts in Grindcore and ends in Ambient – do you consider that a normal development or is it influenced by your love for sound?

I’m sure it’s not as uncommon as you might think. Young people want a visceral music – if you’re the creative type, as you age you start to explore the details more. It’s just a natural progression as an inquisitive human being.

Two of your bands are considered highly influential within our small scene – OLD and Khanate – do you see parallels between the two?

The only similarity would be the intent to create something that is unique and not overly derivative of influences.

Can you understand the status of those two bands for the underground music scene?

Sure, as a lifelong fan of “out” music, I’ve always sought out the fringe stuff. If it wasn’t something I was interested in hearing, I wouldn’t bother creating it.

Especially OLD always strikes me also because of their own journey from Grindcore to nearly dancable post-punky, nearly industrial stuff with quite some electronic snippets. Did all of that come naturally to you and Alan?

The OLD recordings were easily the most self-indulgent recordings I’ve ever done. The music was written without any premeditation – half of it was probably improvised for the most part.

Who came up with the idea of the Old Lady Drivers?

That was the world inside Alan’s head.

Whenever I listen to OLD I have a feeling of being awestruck because there is just so much happening on those records, how was it possible to play that live?

Drum machines, samplers, and rack processing gear. We were a 3-piece for live performances, but managed to fully recreate the recording. I was typically stuck with my guitar behind a 3-tier keyboard stand.

Do you still play live nowadays? If so with whom do you perform and which material?

Rarely – though I may have some performances and short tours lined up for the near future.

Would you like to do a re-union with any of your old bands? Which one? Which setting?

Loaded question – I’m generally against reunions. If you’re not going to make new music that compares favorably with your previous work, don’t bother. There’s already enough disposable music to wade through these days…

Over the years you have collaborated with some very interesting people – Aaron Turner, Rob Proctor, Stephen O’Malley, KK Null – is there someone that you would still like to write music with?

Of course, far too many to list. If there weren’t, it would be time to retire or find a new line of work.

How did it happen that John Zorn played on OLD’s second album?

John is well-known to be a fan of extreme music. I met him through Mick Harris and he offered to sit in on the mixes and play on a track. We took him up on the offer, but he had a lot of issues with the mix engineer and didn’t really get overly involved.

Especially the collaboration with Aaron Turner seems to have been a very fruitful one as I can remember a time after the millenium when seemingly every HydraHead-release was mastered by you. Would you agree that you were HydraHead’s household mastering engineer?

Definitely not – I rarely worked on their releases until some of the more popular titles were being re-issued on vinyl. Of course I was doing production work on my own releases, and a good amount of production and remix work for various bands on the label, but I think their production values were more rooted in the metalcore scene until the later years when I had a bit more involvement.

How would you describe working with Aaron?

He’s always been effortless to work with. We were friends for a short time before we started working together in various projects, which can sometimes make it a bit easier to get to know someone’s creative process.

Of course, it’s always on the radar.

In general: Is there a record that you cannot listen to even though the songs are brilliant but the mastering is awful?

Okay, up next a few simple questions: Mastering or performing live?

Apples and oranges. [But] I do prefer to relax more than carry gear.

Harmony with a noise source for texture.

James, thank you so much for your time and for giving us so many interesting insights into your own music as well as into how you work with the music of others.

Here are some further links for your deep dive into Josh and his art: