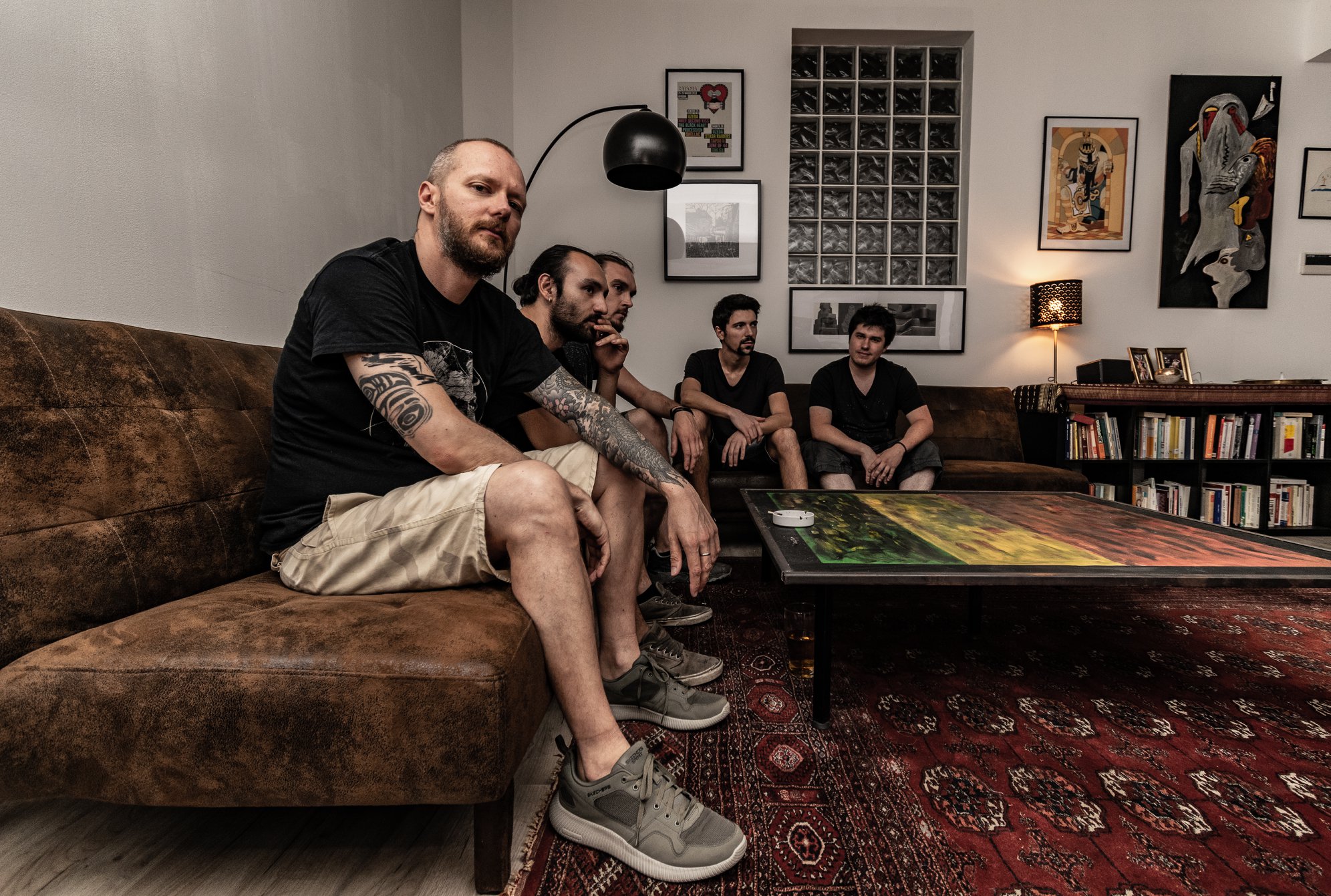 Roughly two months ago, Italian Post-scene-Powerhouses Riah and Postvorta joined forces to release a mighty split. Reason enough for us to interview Riah!

Now guys, congratulations on the new release. Who came up with the idea of joining forces with Postvorta? And how did the collaborative song came to life in the end? Flavio The idea of joining forces with Postvorta came to our bassist Diego. We all know Postvorta for a long time, mainly Andrea Fioravanti, and we have always thought about playing on stage with them. During the pandemic we realized that we could set up a long-distance collaboration. We asked Postvorta to write together a song that could represent a synthesis of all of our music experiences. This gave birth to a difficult but exciting challenge, but in the end it resulted in a successful choice.

Did you write your own song for the split right or had it been written before? Flavio Both “Epidermide” and “Hollow” were already written and recorded before the pandemic and before the split project, but they were really important to the writing process of “RIAHPSVRT”. Those songs represented the style of the two bands and were a perfect starting point from which to start writing a suite of over fifteen minutes that synthesized and harmonized the souls of the two bands.

How must we envision that writing and recording process? Flavio The writing and recording process has been a long and gradual work. We started with a simple idea – a bass line – and later each one of us added their contribution. Each member of the two bands proposed their ideas, we discussed them a lot via chat, we selected and cut a lot. Slowly we built a structure for the entire suite, then everybody added their instrument. It’s been like creating a patchwork of different styles, colors and suggestions, yet consistent and harmonious in the end.

How was the recording during the Corona-epidemic down? Flavio It’s been a unique experience. We were distant, each one in their own house, but united by a common idea. Everyone recorded their ideas via PC showing them to the others. The most interesting thing about that period was the mutual confidence between all of us – everyone knew to be one part of the project, but didn’t know what would have been added next. To record and send the ideas to the others was a shot in the dark, but it was something we were doing all together and we trusted each other. The result has satisfied this confidence.

Has the Corona-epidemic changed your style of writing as a band? How do you normally write stuff? Diego The epidemic changed drastically our way to write music – in a better way! Autumnalia was written by instinct in our rehearsal space. Undoubtedly it bears a visceral feeling, but on the other hand some of the arrangemets could have been realized better – I am a damned perfectionist. Being at home alone with my instrument and thinking about writing new music was a new experience that gave me the chance to see things from a new perspective. After having defined the songs, then you can fix the rhythmic patterns in the rehearsal room to give them power. We’d like to maintain this approach to songwriting.

Your music is largely instrumental – did you never think about having a vocalist? Diego On the next album we’ll have a guest vocalist on some tracks. The lockdown period brought us some unexpected chances: in 2019 we toured in Germany with Bruecken and it’s been a great experience. It doesn’t happen everytime to spend such a good time together, so then I kept in touch with Jens (their bassist, who’s also in Suffocate For Fuck Sake). During our first lockdown Andrea and me came up with a song that had a structure that felt new for us. We sent the song to Jens asking his opinion about the need for vocals. He told us we were right and let us know that Daniel from SFFS was available to help us. In a few days Daniel had the song and eventually his performance left us speechless. He caught the song’s fragile mood and the intensity of our music. This opened up a collaboration that endured for other songs!

This is their split with Postvorta:

How close is “the scene”? Which bands (apart from Postvorta) are you close with? Diego The scene, [well] it’s kind of a sensitive subject. I can tell you that I have deep esteem for some bands we played with like Storm{o} and WOWS because of the tenacity they have always shown in offering music that is never banal, out of the box. Another band I like is Rise Above Dead with whom we were supposed to go on tour in Germany exactly a year ago, but nothing has been done.

Which other bands and labels should we check out? Diego The band that I think is the most representative of the darkest sound made in Italy is undoubtedly Nero di Marte, who just signed with Season of Mist. In the Post-Metal scene and its derivatives I’d say Three steps to the ocean, The Chasing Monster, Last minute to Jaffna, Noise Trail Immersion. All these bands have had to do with the historic label Shove Records that I can only recommend to all of you. Regarding Screamo, Fresh Outbreak has some real gems and finally for black and death metal stuff I’d surely recommend Drown within Records and Spikerot Records.

When I listen to Riah, I always have a feeling of listening to Jazz and Noise at the same time – two genres that are not really combine-able – is my perception correct? Do you want to combine stuff that is not really working together? Flavio That’s right, our idea has always been to combine opposites, but we never wanted to simply blend different influences and ideas, it is important for us to seek harmony between the parts of the whole. After all, Post-Rock and Post-Metal are two musical genres very open to experimentation and we have never wanted to settle for the simplest solution: for us, experimenting, daring and harmonizing different sounds and styles is fundamental in the writing process.

What is the driving musical force behind Riah? Flavio I believe there’s more than one force behind our music. Certainly the influences and musical background of each of us are important: together we manage to combine influences that literally range from metal to jazz, from electronic music to avantgrade. This is essential in order not to lapse into predictable and obvious solutions, but above all to make our music a continuous process of evolution and improvement. Another great strength is the passion of our bassist Diego and his love for the project: he always manages to get us involved and passionate, but also to encourage us to find the best solutions while writing the songs, so each of us succeeds in the best ways to express oneself together with others. Finally, the greatest strength is the desire to express ourselves through sound to tell our feelings, our vision of the world and facts, but mostly all the emotions that only through music can be communicated without filters to the listener. In this, music is perhaps more effective than words.

People label your band as post-metal – do you agree with it? Diego I actually find it a bit restrictive for what we want to play. In the next album we’ll have cellos, violins, even a baritone sax. We certainly play “post” music, but in the broadest conception of the term.

What is striking is, that on Autumnalia you only used Italian song titles – why? Doesn’t it make it even more difficult for your non-Italian audience? Flavio Now it seems strange to us too. Autumnalia was our debut album, and we didn’t expect it to have an impact even outside of Italy. Then over time we realized that our music could also please a non-Italian audience. We had some confirmation of this in Germany, during the tour we did with Bruecken: the response from the German public was exciting. We are about to record our second album and we already decided that the titles will all be in English.

You have now worked with two amazing labels – Trepanation and Moment Of Collapse Records. How did these collaborations happen? Diego Moment Of Collapse is a label that I kind of always followed; I loved almost all of their releases. Writing for a webzine (GrindontheRoad) it happened in several cases to interface with them and when Autumnalia came out in the States through Fluttery Records, we signed a contract exclusively for the CD format. I took courage and let Bastian (the head of MoC) hear the record and when he replied that he liked it I was in seventh heaven! From there we further consolidated the relationship which also resulted in the production of the split in vinyl format without listening to anything, essentially sight unseen. Based on trust. I still find this incredible. With Dan from Trepanation the path was similar: I took care of a release of him that I particularly loved (UpCDownC) for grindontheroad and I discovered that Santo from Freash Outbreak (another label involved in the split) had worked on it together. Santo sent him the split, he listened to it and he immediately liked it!

What is next for Riah? Diego In July we are going to record our next album which is the most ambitious thing we have written. I can’t wait to let you hear it!

Some quick questions to finish off the interview – you get two choices and must choose one, a short explanation would be awesome.

Tour with Pink Floyd or Nirvana? Flavio Nirvana because of anger and discomfort. Diego Pink Floyd because they wrote “Welcome to the machine”.

Pasta or Pizza? Flavio Pizza is love. Diego Pizza. A pizza made by a good pizza chef could make those who eat it cry with happiness.

Torino or Milano? Flavio Torino because Milano is EVIL. Diego Torino is a wonderful city. Milano is wonderful too but is much too chaotic.

Be sure to check out our review of the split with Postvorta.

And if you still haven’t checked out their debut album Autumnalia - here you can do so: