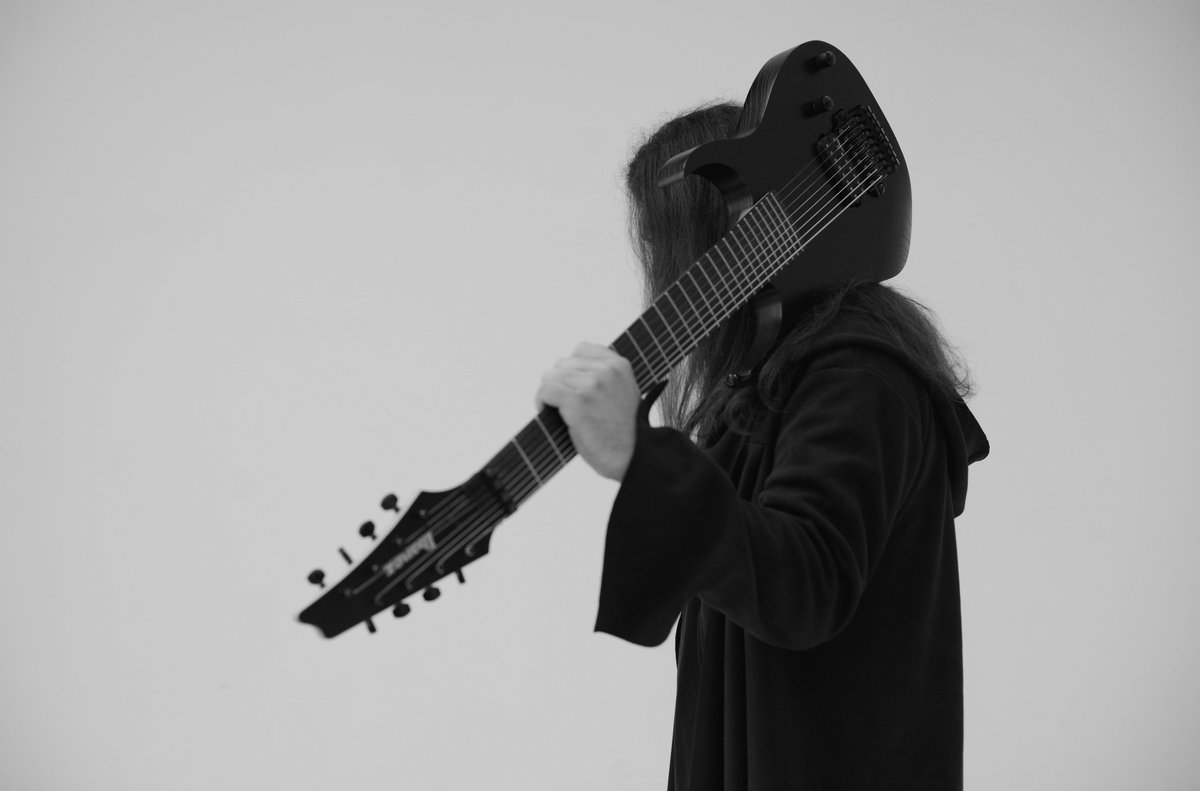 Hailing from Russia, Raljarn offer a cold mix of styles incorporating everything from Post to Black Metal. We recently reviewed their debut album Practicing Death and also caught up with creator Dan Mikhalchenko to dig a little deeper into the concepts, music and process behind the record.

Let’s start at the beginning, can you tell us something about the formation of Raljarn, and the decision to effectively do it as a solo project as opposed to a collaborative effort? Actually, originally when I started to write these songs, they were supposed to be for another project, called the AporiA. At the time I was writing those songs there were three of us in the band. Ivan Shishkin who helped me a lot with drum programming for the album (since he’s the drummer I trust) and Artem Sergeev who performed vocals for four of the songs on Practicing Death. We really like working together, but there was a big issue - all three of us are actually songwriters and we’re writing in different styles so it was not working out for a single project. Also the concepts and aesthetic that I was going for are too dark I guess for the AporiA, so I didn’t want to take over the band and turn it into my project (which I could do at the time). I came to a conclusion that it would be better to start from the scratch for this album and use the aesthetic that I want right away and just do things as I personally like without compromising. But AporiA is also alive right now - Ivan took over that project and puts his song writing into that. I also play bass for AporiA and I also play bass for an upcoming project from Artem. So there are three of us helping out each other. So that decision worked out well I would say.

Who are your biggest influences musically speaking? And how would you describe your sound yourself for someone who has yet to hear the album? As one may notice I like to blend together different styles - like Math-Metal and Post-Metal putting some black metal sauce over it. Some bands that influenced me as a songwriter are Meshuggah, Hypno5E, Nemertines, Gojira, Oathbreaker, Ultar, Second to Sun, Vildhjarta. I would also mention a trip-hop band Archive - I was influenced by some of their song structures and that meditative feeling. I have to also mention Wardruna and Heilung - the aesthetics and themes are inspired by them. So Raljarn is a hell of a mix. For those who have yet to hear Raljarn I would say: if Meshuggah and Wardruna make sense to you at then you probably will like Raljarn. Or if you’re just into dark atmospheric metal that has some grooves in it.

I was impressed with the overall concept and aesthetic of Practicing Death, it seems to be really well thought out but I feel it’s crying out for a physical release. Are there any plans to make copies available in this way? Thank you! I really wish I could do a physical release, since I guess the package is kinda well suited for that, but I don’t have enough requests for that and I just started to actually find people who are into my music and there are just not a lot of them yet. So it just comes down to the fact that it’s too expensive at the moment. I’m the only person responsible for covering up all the expenses, etc. Making a batch of physical copies which I’m not sure that will be bought is a bit scary. Physical releases also have to be promoted and that also costs some money. But I’m still thinking about that. Maybe I can find a place where I can make a small batch just to try it out.

Tying in somewhat with the previous question, a lyric sheet would have been most welcome as I was intrigued by some of the lyrical concepts on the record. The following caught my eye on your Bandcamp page - “Myths, Shamanic Stories and Existentialism”. Can you give a bit of an insight into these concepts and perhaps a meaning for a song or two from the record? Yes, I agree with the lyric sheet - that’s the main reason why I didn’t completely abandon the idea of physical copies. Yep. I’ll try to be short, but the concept is not so easy. Actually Raljarn is the name of a character and all the songs are based on experience of his perception of the world or the opposite (world perceiving Raljarn). He’s kind of a shaman. His “shamanic” ability is to be able to live as someone else, to experience life through other perspectives and to collect that experience. I want to mention that this also correlates with the music style - the blend of different genres. This ability is inspired by a book from Max Frei called “The Complaint Book”. At this point, names of the songs like “DarkHuman”, “MetaHuman” etc. probably will start to make sense. Now to the songs - the most myth inspired song is probably “MetaHuman” - there is a part in the song where my favourite Norse myth is described, when Odin hangs himself on Yggdrasil to gain knowledge. So he actually “Practiced Death” to achieve his goal. The name Practicing Death itself is a reference to the Greek philosopher Plato. He was saying something like gaining knowledge - is remembering what your soul has forgotten. And every chunk of knowledge makes the soul more free. And when you’re dead, your soul is completely free and now remembers everything. So that’s the name Practicing Death here - gaining knowledge and experience. A bit more about shamanism - there is a song “DarkHuman” which is heavily inspired by Lovecraft and the main character here is performing some rituals. “UrgeHuman” is existential, it’s all about subjective experience and the fact that the only real world for us - is the one we perceive through our feelings and there is no objective evidence for you to confirm the reality. Sorry for the long answer, but it’s hard to describe all the concepts.

How has the lockdown/pandemic affected Raljarn and promotion of your record? Was Practicing Death something you were going to tour with? Or do you view the project as a studio only affair? I guess the pandemic only influenced me personally - it’s creator, ha! There’s been some rough times for me. But when I was writing, I was writing with the thought in mind that I’m not going to tour with it. Of course songs are playable, but there are four or even five different tunings used on the album - so I would need to have four or five decent 8-string guitars to do a live show, which I don’t have (and I’m also very picky, so I would not play just any 8-string!). For now it’s only a studio project. I consider this music as something that people would listen to when they are alone and want to dig deep into themselves. I can only guess how the promotion could change if there were no pandemic situation, since that’s the first time for me being the only one responsible for the project.

I felt the use of four vocalists was a flaw on the record overall – I thought the results were mixed. What was the thought process behind using four different vocalists? Were you happy with the results and is this an approach that you would use on future recordings? At first Ivan Hansen who did vocals for “DeadHuman” was going to do the whole album, but he couldn’t do it physically, because he has his main project Frostbitt in which he puts all his major efforts. And since then I was struggling hard to find a vocalist to do the vocals for the rest of the songs. And I was struggling REALLY hard. There was a time I was thinking to abandon it all even. And this collaboration thing was a solution for me to actually release a record with vocals and lyrics. I still would prefer to have one voice for the whole record, but I’m pretty happy with the result - all the guys that I worked with are extremely talented. Most probably in future there will be only Artem doing vocals for the songs. Also a few days ago I released an instrumental version of Practicing Death - for those who don’t want to be distracted from the music by different vocalists.

Speaking of future recordings I have seen on your Facebook page you were tinkering with some new material; how is it shaping up or what stage of the process are you at? I actually wrote lots of new material already. There is enough for the album or even more. But I want to try another approach now. I want to do a bunch of conceptual EPs rather than one big album. For the first of such EPs recently I’ve finished recording all the guitars and the bass and in a week or so, my friend Ivan, I mentioned earlier, and me will start to work on drums and mixing. There will be three songs. I also wrote most of the lyrics. Actually one of the songs from Practicing Death has a reference to this future EP. I’m actually really hyped about this EP cause the style of my songwriting is much more formed now and I really want to share it.

It’s not clear from the credits, was Practicing death self-produced? If so, can you tell us what equipment you used in terms of recording software and guitars/amps etc. I have to congratulate you on the sound of the album, there’s great clarity and separation of instruments. Honestly, I hate mixing. Mixing was performed by Emil Reitan - he’s the guitarist of Frostbitt and he always does an amazing job. But I like to make my own guitar tones, so there was no re-amping, he added some fx on top of my tones here and there, but overall guitar tones are mine. For guitar tones I use plugins. For Practicing Death I used JST Misha Mansoor for rhythms and electric bow. And I did clean tones on Bias FX, cause I like Cloner simulation in it. But once again I want to mention the EP I’m working on right now – there’s a big change in my tones and how I’m recording. Also since I play bass a lot now and digging bass tones a lot - there will be also significant change in the bass sound as well. Still the big part of my tone is the mighty Ibanez M80M. This thing is a beast and has lots of character. And it’s been big part of the sound on Practicing Death and will be a big part of future releases. In my opinion this guitar is very underestimated by guitar players.

To finish off, is there anything you want to say to our readers? Any links etc you specifically want included? I want to say that I hope that they’re feeling ok and are getting through the pandemic well. The pandemic caught me in a bad time and I also went through corona as well as my relatives who live far away from me. So I really mean it when I say that they’re ok in these mad times. Support each other, support art. And now to the fun part - I want to show you the music video for my song “DarkHuman”. It is actually a little metal cartoon. It is a Lovecraftian story and I think it’s not often when you see a metal cartoon. I’ve found few artists who agreed to work with me and draw what I had in mind. Hope you’ll enjoy it.