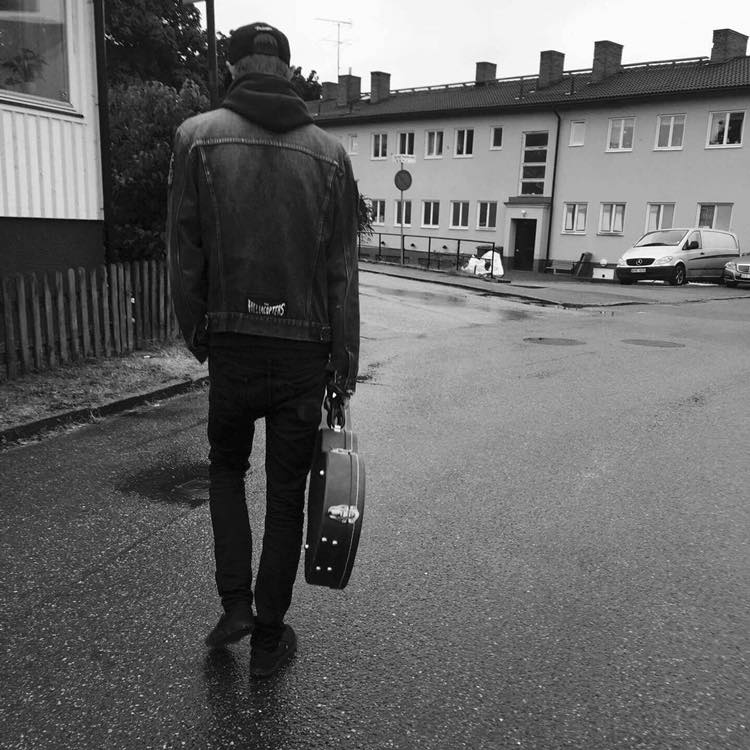 After a few weeks we need to kick off our Wednesday Q&A – series again. And believe me, we got some pretty good ones lined up for you. To kick-start it again we have gotten a really interesting partner, Alex Stjernfeldt, the mastermind behind Sweden’s post-metal-project Novarupta.

A few years ago, Alex Stjernfeldt left a very influential Post-Metal band and started a new project which focuses on the four elements – Novarupta. By now the band has released three records – we reviewed the last one – and therefore we thought it was about time to catch up with Alex and talk with him about everything Novarupta. Enjoy Simon’s interview with him.

How are you feeling now that your new album has been released?

To be honest, I’m not sure. I still have a hard time understanding that the album is out. It’s been a long and winding road to get here and we have had to tackle many obstacles. So maybe that’s why it’s hard to grasp it all.

What are your overriding feelings on the reactions to it so far?

I am in awe! The feedback has been overwhelming so that means a lot! It feels like people have understood what I aimed for and what this album is!

This being the third part of the planned four-part album cycle relating to the elements, how do you feel the whole thing is coming together so far?

So far, so good! I never had the sound for each album planned, I just wanted the music to have an organic development. That and I wanted to music to convey the feeling of the element it should represent. And it feels like I’m on my way to a good conclusion for it all.

What is the main characteristic of “air” for you?

To get a feeling where everything feels elevated, almost like it’s floating and could take unexpected turns due to the change in the wind.

How difficult was it for you to portrait the very different characteristics of “air” musically?

It took a while to find the right sound. I could almost hear how I wanted the guitars to sound so I spent quite a lot of time chasing the guitar sound I needed for it all to come together. After that things fell into place.

You were not the first one to do such a concept album about “air” - was there any important outside influence concerning the topic?

I had no idea that others have ventured into the air with there music to be honest. So no, no influence from that.

American prog-hardcore veterans Thrice also did an album cycle about the four elements – do you know The Alchemy Index and if you do, what do you think about it?

Sorry, I have only heard of their name. Possibly might have heard a song. But did not know that they have done this album cycle. Probably need to check it out to see what I’m up against, haha.

Where there any specific influences at play on this album compared to the others?

Yeah, the other albums drew inspiration from heavier music and albums I grew up with. This time around I’m much more influenced by albums like Steve Reich’s Music for 18 Musicians, Godspeed You! Black Emperor’s Lift Your Skinny Fists … and John Murphy’s different soundtracks.

The pandemic knocked all touring plans out of the window, are there any plans for you to play any live shows? And would you want to play live shows without the original singer?

Novarupta has never been a touring band (we’ve only done two very special shows) the pandemic never hit me that hard in terms of touring, it gave me more time in the studio. And as for now, no; no shows are planned and I would not perform a song without the original vocalist.

How did the artwork for the album come about?

I have worked with Arjen since the beginning of Novarupta and he is a huge part of the band. We allow each other creative freedom in order get the best out of everything. I sent him the theme and album title and this cover is what I got back! And it is stunning.

Do you spend a long time nailing down the tuning and effects of the guitar? Also with regards to the other instruments too.

Both yes and no. I always try to keep it simple and straight on. But with this album I spent more time before I started to record to find the guitar sound I wanted. Otherwise I try to keep it” punk”!

Would you consider doing a split album? And if so, what bands would you like to do this with?

I’m not opposed to the idea. And I can think of a couple of bands that would be cool to share an album with. What bands would you like to hear Novarupta do a split with?

There are varying attitudes to song-titles in bands: For some the song title needs to really explain the song and for some the title can also contain completely misleading ideas or even humor. What idea of song titles do you follow?

You once did a gig where all of the various guest vocalists came and sang live for you, how did that come about?

We have done two shows, the first one where we performed Disillusioned Fire with all vocalists. Our second show consisted with songs from the first two albums and one of the singles. I guess the planets just aligned so we were able to do the shows with all these amazing vocalists at the same place.

How important is playing live for you? What was the best live experience you had?

It’s not that important with Novarupta. But with that said, I love playing live with the band. But since this is such a huge project in scope it takes some planning to make it work. And I would say that both our shows was some special, I can’t just choose one of them.

Do you have a favorite song to play live?

Hard one, but I guess I have to say ”Pyroclastic Flows”.

Is there anyone you would like to open for at a live show?

If Neurosis would ask, I’ll accept in a heartbeat.

What is the next live show you are looking forward to going to see?

I think it is Gösta Berlings Saga. Amazing band, both live and on record.

What has been the best musical advice you’ve ever been given, and who gave it?

It’s probably: ”It’s called play music, with emphasis on play. People tend to forget that music should be playing with friends” and it was London LeGrande from Brides of Destruction that said it to me.

Last regular question, what can we expect next from Novarupta? I’m guessing this will be dominated by the Earth album! But hopefully you can elaborate if possible.

Sadly I can’t elaborate more than that the focus is on finishing up the “Earth” album. And we’ll see if there’s more in the future.

Now onto our quickfire round:
Wine or Beer? Beer, always beer.

Guitars or synth? Both!

Vinyl or streaming? Both!

Touring or Writing/Recording? Both!