Interview with Some Became Hollow Tubes 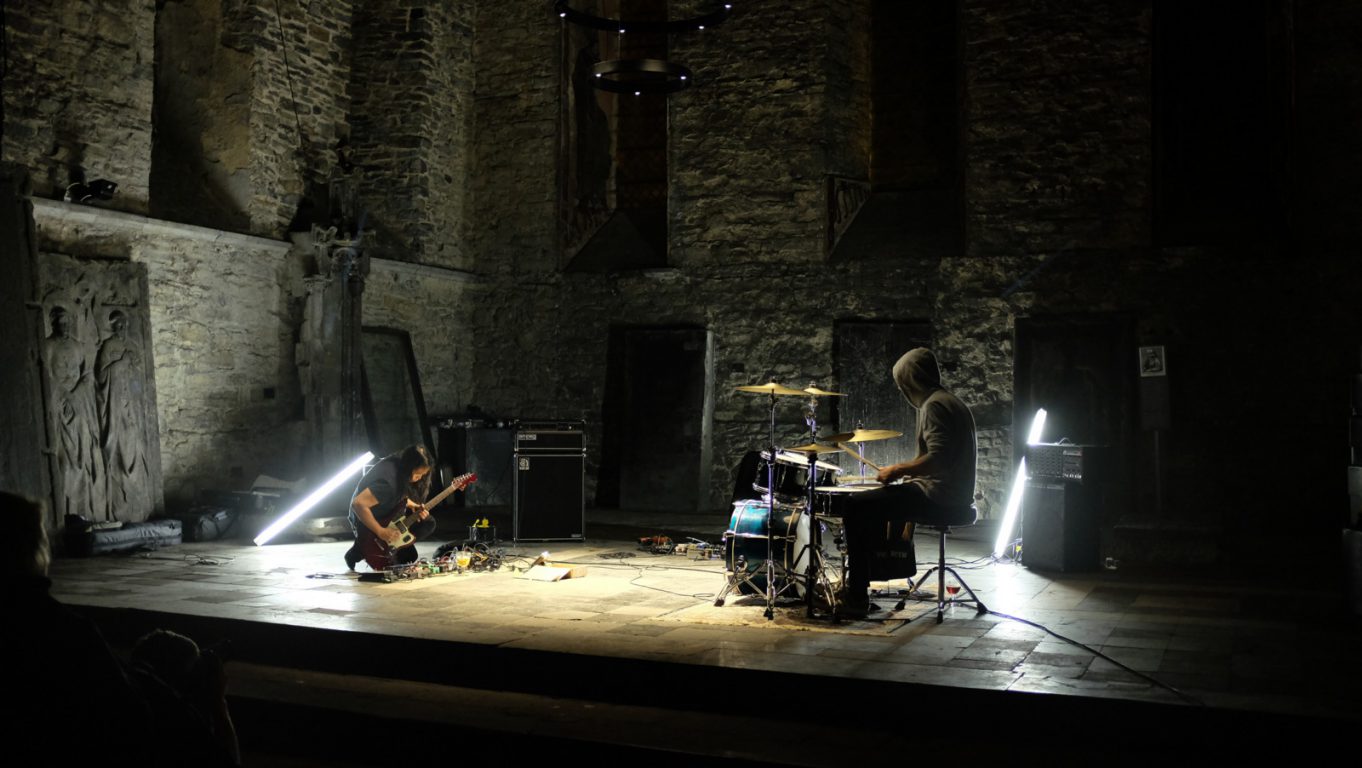 Some Became Hollow Tubes is a two-man-supergroup because the members are both famous individually for their other projects but also because they combine two sides of the off-mainstream spectrum which are not diametral opposites but still not combined that often.

Eric Quach is best known as thisquietarmy and over the course of the last 15 years he has collaborated with many artists from different genres, for example with French prog-post-metallers Year of No Light. In Some Became Hollow Tubes he is joined by Aidan Girt on the drums, who is best known for his work with Godspeed You! Black Emperor. The two met some years ago and wanted to work together on a project that then became SBHT. Since 2019 they have published three records and their last one, Unhealthy For Sensitive Groups has seen a re-release by Scottish music-lover-go-to label Ripcord Records. This re-release is a good opportunity for us to talk to the duo. Enjoy!

Eric Because the album is a recording from a spontaneous live show we did in Berlin during a Godspeed day off in 2017 while I was there (mostly snapping photos of swans swimming in the Spree in Kreuzberg), I thought the full title “In 1988 I thought this shit would never change” referred to Aidan’s feeling about the state of the world, the year before the wall fell.

Aidan We thought the world was for sure going to end in a nuclear war by 1988, but now that there is a war in the Ukraine, I’m having to explain to the kids what thermonuclear war is. But also why the planet warming by 3 degrees is very bad. This planet is quite beautiful and filled with a lot of amazing people, it would be a shame to let it just go to waste because some people don’t give a shit.

How do you feel the world has progressed (or regressed) lately?

Aidan Wheelie suitcases are better than carrying everything everywhere.

Eric Oh, I was going for a serious answer on this one but… The blue dot on the map on our phones that allows us not to waste time getting lost is awesome.

Would you see a difference there when differentiating between mankind and human society? People and politics?

Aidan I don’t really like men, if i had to choose i would choose women. It’s weird that in English mankind and human both contain man, man. But in any case, no, it’s all the same, people are all wrapped up in their politics and it’s a lie to claim we’re not.

Eric My brain just exploded. This is going to be a long interview.

Both of you have had longstanding careers with vast discographies and many collaborations (especially on Eric’s side) – why did you start yet another project six years ago?

Aidan Because we’re not done yet.

Eric Why not play or do things with other people once in a while? There’s like 8 billion of us. I personally don’t see the point in recreating the same kind of album over and over again, therefore collaborating with different musicians helps extract different ideas and create something new. I don’t see the point of art being static, repeated, unchallenged, stale, just because maybe careers were built on the success of a certain type of sound - that’s certainly not how you measure art.

Do you consider yourselves misanthropists or just people who have grown weary of the ineptitude of mankind?

Aidan I love people. We can do better. I’m not weary of anyone.

Eric Hum, yes. But then I started channeling it into music, travelled the world, met people from all walks of life and exchanged perspectives with them. If music (in general) helps to open people’s eyes, including our own, or have us think about certain issues that affect people whether we are personally affected by them or not, then that’s all the awareness we can hope for, in order to maybe try to steer this drowning ship in the right direction.

Your glass – half-full or half-empty?

Aidan Full and then empty. We believe in hydration.

When listening to your compositions I always have the feeling as if you want people to lose themselves in them? I mean two tracks combining for 35 minutes?! Plus a bonus track!

Eric Have you heard of this band, Godspeed? I’m kidding. We just let the music dictate where it goes.

How do you write your tracks? Do you send ideas along or how must we envision the process?

Aidan Eric starts playing and then I play drums. Usually.

Eric All the music we play is in the form of raw jams, where we try out a bunch of different things that may or may not work, then intrinsically edited to the point where it becomes acceptable to us. We don’t know how to do it otherwise, except at the beginning when we swapped files but quickly we gave up on that idea as soon as we actually played together.

Something that strikes me about your compositions is the fact that they never sound made-up or composed but always organic and self-explaining. How much time does that effect cost you?

Aidan None. We record. We listen while driving the car or doing the dishes. We pick what we like. We mix it.

Eric The songs are made up on the spot, meaning it takes the exact amount of time as the song length is. Post-production however can take a few weeks, months, years because it will never sound perfect and at some point you have to give up and decide whether to let other people hear the track for what it is.

Some people call your music shoegaze, some have highlighted the ambient mood or the play on dynamics often connected to post-metal. Is there any genre that you see your music in?

Aidan Oh we leave the labels to those that have to write about our music, we just kind of play.

May I ask whether you guys have any influences on your music that might not be audible at first?

Aidan We listen to a lot of music. All the time. Almost none of it sounds like the music we make, but maybe the spirit of this other music does slip in.

To what extent is timing important for that effect?

Eric Timing in improvisation is key. After that show in Berlin that made the first record, I was trying to answer all kinds of questions from a perplexed audience that didn’t know or understand when we had time to rehearse such a structured set when it was actually completely improvised. But then they were like “but how do you guys know when to change parts and stuff?” and it’s like — “well at that precise moment, we just knew?”. Sometimes magic happens, and that night in particular, I guess it happened a lot. But a lot of times, it doesn’t.

Do you use a certain ripple effect, Eric?

Eric I use a lot of effects, I’m not sure what is considered ripple effects, but phasers, modulations, tremolos and cascading delays do sound like ripples, at times.

Aidan – at the beginning of the third and last track on the new record your drums have a pitch and reverb similar to a guitar’s, incidentally?

Aidan I don’t remember putting any effects on those drums besides EQ and compression.

Eric I think it’s the reverb from that old car wash. I think it’s how Aidan hits his snare. I think that’s how the sound cut through whatever I was playing at the moment and how it was captured. See the above note about magic.

Your music is instrumental – do you think that vocals would derail it?

Eric Not opposed to vocals, but it just sounds a lot more complicated to improvise good vocals. I suppose someone could do a good job after the fact but it wouldn’t be either of us.

Now – the last thing that I want to talk about are the titles. First the name of your band – is the ambiguity in it intentional. I mean it can be derogatory for mankind in general or it could be a sharp comment on social media and its “Tube”?

Aidan Music is a form of communication, and song titles are an opportunity to engage people and make them think or laugh or angry, or something. The band name comes from Carl Sagan’s Cosmo where he talks about a particular branch of evolution that became hollow tubes floating in the ocean.

Eric I mostly leave the titles to Aidan but sometimes I chime in. I’m just happy the band isn’t called something like “pizza poutine chicken wings diarrhea”.

Second the song titles on the new EP like “All I Can Think About Is The Earth On Fire And The Smoky Skies” or “No One Is Okay” - is the world collapsing and do you want to see it burn?

Aidan Burning is a terrible way to die. The world is already heating. Parts of this earth are becoming unlivable. These pressures cause wars. Wars cause refugees. The nation state is bullshit and it has to end and we need to think of this earth as one planet. We need a safe and secure supply and the end of the criminalization of drug use. This planet has more than enough resources to house and feed everyone…without heating the planet.

Eric I expect to see it burn but I’m not hoping for it, that’s not a very nice thing to hope for.

Beer or wine?
Aidan Depends on what day and what dinner and what beer or wine.
Eric Beer in beer countries and wine in wine countries.

My Bloody Valentine or Slowdive?
Aidan Never heard Slowdive, is it like Slow Thai?
Eric I guess I should answer this one seriously - without Slowdive, I wouldn’t be pedal effect and amp hunting all over ebay for discontinued gear, some 20 years ago, that make up most of my sound today. However, today I’m leaning well over on MBV.

Noise or Ambient?
Aidan Whatever helps the people of Haiti.
Eric Noise is ambient.

Fugazi or Minor Threat?
Aidan Whatever keeps global heating to below 1.5 degrees.
Eric Is Fugazi Fugaze?