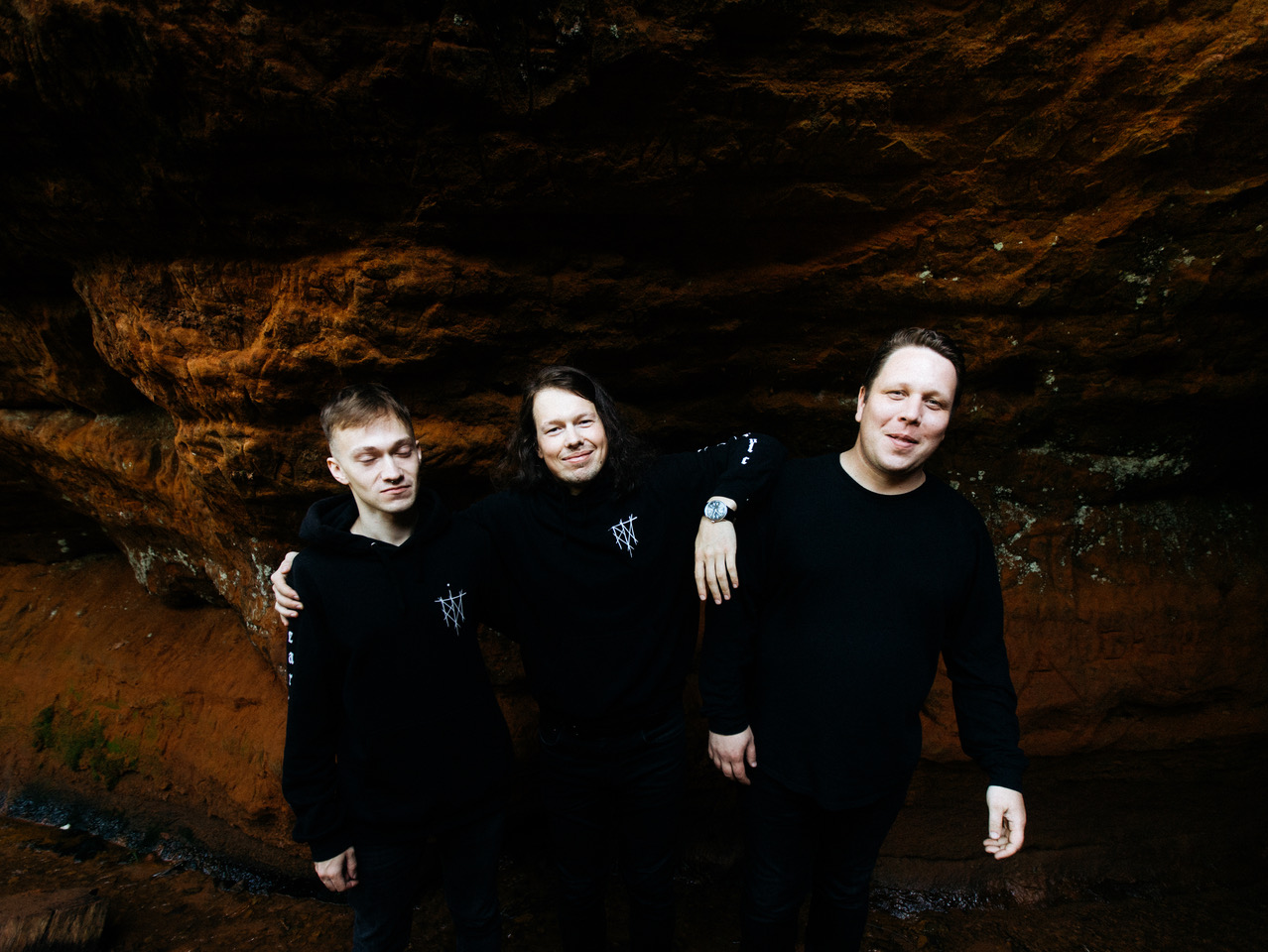 Whenever people talk about TRNA from St. Petersburg, Russia, there is hardly any conversation without the words “mood”, “storm”, “Shoegaze” and “Atmosphere”; and in some ways - those ideas are right, for the band is really capable of coming up with hurricanes of melody and power, precision and skills that barely any other band in this genre can keep up with.

A few weeks ago, our (Black-) Metal-encyclopedia Knut sat down with his Russian friends and conducted this interview talking about their new album, which he also reviewed together with Thorsten (you can read it up here), the scene on the banks of the Neva River, the influence of the surrounding nature and much more.

TRNA is quite an unusual name for a band, how did you come up with naming a band after an adaptor molecule. Or does the name have other meanings?

Hey, first of all thank you so much for inviting us for this interview! This is a common misconception about our band name. Actually, it doesn’t have anything to do with the molecule and it simply translates as grass or wheat from Sanskrit.

How do you think the name is reflected in the music you make?

Well the music evolves over time but it really reflects our core concept which is nature and nature-themed compositions so I think it fits well.

You all played (and play) in different bands when you formed TRNA in 2013, debuting in 2015 with Pattern of Infinity. Since then you have kept and developed a sound that is distinct for you. How did you come up with the sound?

Even though this washed out wall of sound kind of thing is typical for Shoegaze I wasn’t a big fan of it back then (now I am) and I kind of invented it from scratch playing around with delay and reverb pedals. I think it is in this combination of washed out guitars and blast beats that makes our music so ferocious and energetic yet not as extreme.

We have always tried to be unique in our sound. Obviously, we had several influences but they wouldn’t be like direct references for a similar sound or something. It is rather some things from here and there and, ultimately, we always try to develop stuff on our own. However, if you’d like some names dropped we could name Wolves in the Throne Room and Woods Of Desolation, Slowdive, a bunch of screamo bands and classic Post-Rock like This Will Destroy You and Mono, also Year Of No Light for sure.

This new album, Istok, comes out at what hopefully is the end of the pandemic that has been very difficult for many both private and professional. How was the rehearsal and recording process in the midst of the pandemic? Did you go to the studio with finished songs from rehearsals? Did the pandemic change how you normally do things relating to recording?

Yes, the pandemic turned out to be quite a difficult time for us. At first, we didn’t rehearse at all and then we were careful trying to avoid any public transportation and stuff. However, when the lockdown happened we had Istok almost complete. The tough part was not to play together for such a long time. It was like three months or so.

And the effects of this isolation or mental health were also not nice. However, we were lucky not to have rehearsal spaces completely shut down. I heard that in Europe it was much stricter and harder to get to a studio. Nowadays though, we are completely back to normal as shows and gigs are allowed in Russia so there is no reason to sit at home and wait for something. We are as productive as ever now.

How must we envision the writing process of your new album, or any of your albums that is? Each song you write has a distinct melody, how is that forming?

Well this is a good question! For sure it always starts with some melody or something our guitarist Andrey brings. Sometimes it’s complete pieces sometimes it’s just an idea without any arrangement so we just try to work around it and just build upon this melody. Then it comes to the stage of moderation, so to say, when we have gotten a bunch of track segments and we just sit and choose which one stays and which one doesn’t – there is quite a lot of our music being dumped at that stage.

Your imagery is closely connected to nature, to forest and mountains. How does nature inspire your music? How does living in St. Petersburg influence your music?

It is quite hard to put into words, to be honest. But I think anyone who has ever found themselves at rest in the countryside or just walking in a park will understand how nature can inspire music. St. Petersburg literally made us. The music is as much a product of this city as of ourselves. This region – not just the city but nearby places too – is just a perfect blend of northern nature and opportunities that a big city provides. This is how our ideas and personalities are converted into the final product.

For the first time you have vocals on one of your tracks, the track ”Shining”, featuring Gaerea from Portugal. How did that collaboration happen? Did you all meet in the pandemic or were the vocals added after (or before)?

It is entirely thanks to our label – Candlelight records – that we have such an amazing vocal performance on this track. They connected us with the Gaerea vocalist and he picked ”Shining” as his favorite and went on to write lyrics and record the vocals on his own. This is more than we could hope for and we are immensely thankful.

On your Bandcamp site you describe your music as a “Hurricane full of emotions”, which is in fact quite true for your music. It is very passionate. What are those emotions you build on? Anger? Sadness? Desperation? Joy? Love? Longing? Just naming a list of a few emotions the music reflects for me.

Well if we imagine emotions as different colored paintings – we, as artists, want to draw a big and complex impressionist piece which features not only main colors but also hundreds of semitones, lights and shadows, different shapes and structures. What you listed is all in there. It should shine like a gem and morph depending on the viewer. What kind of an experience you get depends on what you have in mind and how you look at it.

How much do you want to leave it to the listener, at the same time it would be interesting to hear you take on this since you mention it?

As I mentioned above we leave quite a lot to the listener. It would be so selfish to try to impose any strong message on our listeners.

In your announcement for the new album, you wrote: “Istok is the place where it all begins, where you go when you feel that you can’t bear your everyday life. It’s the great nothingness where you find peace. It’s the salvation and relief.” How does this reflect on/in this latest release or would you rather let the listeners describe it to you how it reflects in them?

TRNA has built a strong fan base all over the world, and your music is highly respected and well liked. Do you feel much pressure when starting to working on new songs and album? Do you manage to free yourself from the pressure of high expectation?/

No, not at all. Limiting yourself is the biggest mistake in the way of creativity. We’ve released enough music to be confident in our skills and taste. We just know that anything we’ll release will be up to our standards and this helps to relieve the pressure.

We here at VoS always discuss genres and try to define a genre or two for the bands we write about. In which genre would you say your music fit best in or do you want that to leave up to the listeners to define for themselves?

We don’t like genre tags per say. When you say we play black metal or even just metal to a stranger our music is definitely not what he imagines. Same goes for post-rock and Shoegaze. “Blackgaze” is too niche of a genre anyways. So just go and listen to the album and decide if you like it or not yourself ;)

You have changed labels, how did the collaboration with Candlelight Records happen? Did you seek out many labels? Does this imply a stronger reach for you as a band you think?

Yeah, we were just beginning to write Istok when the guys from the label dropped us an email. We were not seeking at all. We [hadn’t] even thought it [would be] possible for us to get signed to a bigger label. We hope it helps us let more people know about our music and bring in new fans. They also helped a lot with “packaging” of the album so to say. All the stuff that is not music – videos, photo-sets, written press releases etc.

You have used Mikhail Kurochin to record, mix and master all your albums. He plays in bands like Pwyll and Somn where some of you also play. For us outsiders, the music scene in St Petersburg seems quite tight with bands collaborating constantly and members joining other bands. Who are you closest to?

This question I have to redirect to Artem from Show Me A Dinosaur who is planning on drawing detailed info-graphics about who plays where and how every band is connected.

And to the unavoidable question: What is in the water in St. Petersburg as so many highly skilled bands come out of this city with high quality metal related releases? It must be quite a vibrant scene?

It is! I think it’s just about the opportunities and the amount of people in one city. Russia is full of extremely talented people but in smaller cities you can struggle to find bandmates and like-minded people. That’s why in Saint-P and Moscow there are so many projects that have reached at least some level of recognition.

So who from the scene in St Petersburg, apart for the bands you are parts of, should we and the reader check out?

And now, our infamous quickfire questions:

Tour with Year of No Light or with Deafheaven? Deafheaven.

The forest, the mountains or the sea? It is all one thing to us.

Dunk!Festival or Roadburn? Both please.

Ulver or Ihsahn? Neither.